I took the train into London for meetings today: the rail ran late as usual, the carriages were dotted with trash, and the ride cost £20 (with an off-peak discount railcard).  Blame Thatcher, locals shrug: ever since the trains were privatized, the service has been crap.

Baroness Thatcher passed away this week, her funeral is next, and all of the strong feelings that people have about her are filling the papers and conversations in Britain.  The FT and Economist are uncritically rapturous about her tenure and accomplishments; the Guardian laments the divided and impoverished society she left behind.

At a distance, I only knew her as a flinty version of Ronald Reagan, each feeding off the other in their desire to shrink government and free markets.

Reagan is practically sainted in the United States: his life was, and is remembered uncritically at his death.  Conservatives revere his policies and principles; liberals envy his common touch and communication skills.  I remember the initial negative impact on environmental policies (Trees cause pollution), then on labor unions (PATCO), then welfare (These people are losers, not victims), finally markets. 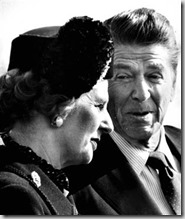 He suffused our political discourse with know-nothingism branded as common sense; divided our viewpoints more than he united people.

Thatcher had similarly common roots, firm views, and thoughtless pronouncements (There is no such thing as society).  But partly because of the parliamentary system she worked in, partly due to the length of her tenure, partly due to her ambition (bolder than Reagan’s), she had a much greater impact on British life and society.  Yet she also had less symbolic stature than the Great Communicator after leaving office.

Both leaders left a philosophical legacy that replaced notions of social responsibility and the commons with Darwinian individualism and market forces.  Social protectionism and resource depletion are the result: markets to not rush to fill gaps left by the withdrawal of the state and companies prosper by monopolistic growth, not innovation.

Arguably, life has gotten harder for the majority of people since Thatcher / Reagan policies emerged; social division and political polarization have deepened.  But the majority don’t seem to understand that these policies work against them.

How, for example, calls for smaller government and lighter regulation are thinly disguised appeals to protect extreme wealth and comfortable lifestyles (Summers).  How the promise of social mobility through entrepreneurship is frustrated by market-driven challenges of finding financing and engaging labor. 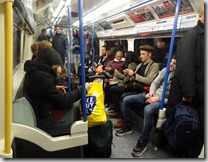 In the Underground, I looked across the faces of my fellow travelers.  So many people from different lands, different talents, different means.   How many of these ordinary people, here and in the US, are Thatcher’s people, or Reagan’s?  Do their political and economic policies really help these faces to lead better lives?

Or, as I suspect, do they largely benefit those who never ride the Tube?