The day started with a chill.

Not just the 3 degree chill of a drippy grey morning over the Maas, but a cold-metal and icy shower chill of a broken hot water heater.

Hot water is produced by an in-line boiler that warms the flow on demand.  The system had gone off-line while I was in Berlin and the reset only produced gurgles in the unit. We have forced-air heatand a big gas hot-water tank in Seattle (strapped to the wall to satisfy the earthquake insurance): gurgling  immersion heaters are not in-scope.

Unlike most Dutch utilities, they were cheerful, polite, and had someone out within two hours.  He recharged the liquids, did the inspection, and fixed the pressure in the shower (a small filter in the line had clogged).    ‘back in business.

The day filled quickly, though.  To my PT to flex the ankle and advise on a creaky shoulder.  A Dutch conversation session for an hour.  A trip to Jos Bogman to try to replace a hubcap that fell off in Berlin.  Many, many calls to try to sort out the businesses (“We’re looking for a way forward, not a way out!”).

By 5:30 I was done, and done-in.  I made my traditional 8:28 am call to my parents (always scary for us both that I’m getting older), then dropped in with friends for a private celebration: cake, biertje, good conversation, distilled spirits.  We shamelessly objectified the salt an pepper shakers. 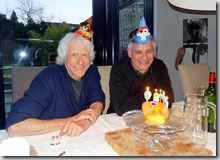 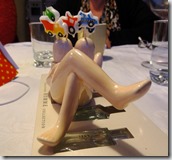 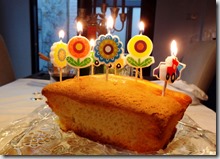 I made a last stop at my ‘local’, under the apartment on Kesselskade, for a Wisseltap and called it a night.

I do remember yesterday when I was 20, when all we wanted was the bleach-blonde, deep tanned look.  Now the bleaching comes naturally, and the sun puts lines in my face.  Worse, I can’t wear the long hair without looking like an aging hippie.

So one last gift: a haircut the next day.