The sun was setting behind us, highlighting the sailboats in the harbor.  They glowed against the dark blue water.  There was a warm breeze, beers and juice glasses scattered over the table.  Our group, five women and two men in 50’s, a 20-something man, were trading easy conversation about families and relationships.

Did you see the picture of Nigella’s husband choking her?  It’s appalling: she was right to have moved out.

I left when my husband threw a glass of water at me.  The physical threat was real and she felt afraid.  The other woman at the table, her neighbor, had divorced under similar circumstances.

What percentage of men abuse their partners? I asked.  Well over half, perhaps as many as 70%, was the female consensus.  Maybe 10%, at most 25%? was the male’s.  Lively discussion ensued.

Partner abuse is morally and legally wrong.  The US department of Justice estimates that 25% of women suffer abuse from their partners, but many say these assaults are the most deeply underreported crime.

The numbers, of course, go higher if abuse is more broadly defined.  Emotional abuse, controlling relationships, manipulative partners are all debilitating and morally wrong, and inclusion lead to  higher numbers. 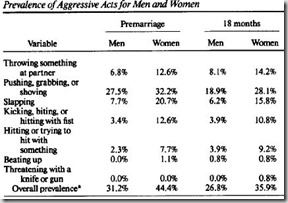 Why is there such a divergence in the perceptions,  with women agreeing that well over half of men are abusers, man converge under a quarter?

The men, and certainly myself, don’t have any friends that are we would characterize as physically violent.  We don’ know what goes on out of sight, and we do end up with a low estimate.

I suspect that age, class, and culture,  may also play a role: the 20-something said that a quarter of his friends were physically aggressive to women in public.

The women seemed to key off of family violence statistics, especially the percentage of abused children who would, in turn, be likely to grow up misogynistic and violent.  One suggested that abused girls grow up with lower expectations of how men behave, more willing to tolerate abuse, more afraid to stop it when they feel vulnerable with  low self-confidence.

In the end, what percentage of men abuse women?  I’d lean towards a third, certainly less than half of men but triple what I would have thought.  Too high in any case.  And, listening to the stories of sadness and loss that followed their divorces, too emotionally and economically devastating.

The conversation drifted, diffused, moved on.  We ordered a pitcher of Pimms and talked on into the evening, the sun reflecting warm and pink across the water and into the clouds.