I made a snap decision to head back to the Continent today: events are in motion in Cambridge and results won’t be known until Tuesday, so there isn’t much to do (control).  Philosophically, I can change the scenery and my attitude, so I hopped the early ferry and hit town about two pm.

It’s a lovely sunny day in Maastricht, shimmering water and laughing children.  It’s also the day of the Ridderronde Maastricht, a series of bike races with some of the top cyclists competing.  The circular course through the  three public squares goes right under my window, so we had an impromptu party and hung out the windows, cheering. 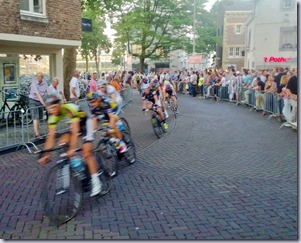 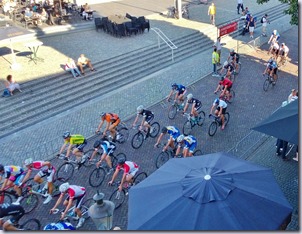 The women competed much harder than the men, the athletes more than the bartenders, the elite athletes most of all.  The cyclists came past every few minutes, preceded by a motorcycle and chased by vintage cars with the event queens and local dignitaries. Very strange. 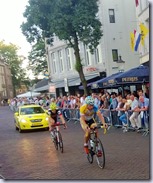 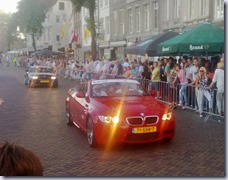 And the music, the beer, and the dancing went late into the evening (on a Wednesday!) with Cataplana, performing at the end of the ‘Skade; always fun when someone you know is in the band. 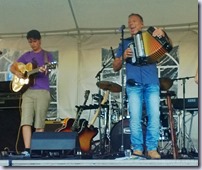 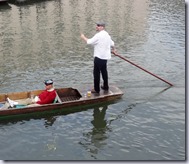 I usually maintain pretty good control of things.  I understand my projects, I know my resources, I have my plans: I execute well.  When I travel, I’m organized just enough to make the day work while leaving most of my time free for wandelen and lunchen.   I try to keep myself under control; I try not to control others.

Yet things spun badly out of control in the past months, and I was surprised and sometimes overwhelmed by events that I thought I understood.  So, is control an illusion?

What is ‘control’?  To my mind, the power to change perceptions and events, perhaps also to prevent change from happening?  Or, as a friend suggests, a matter of saying “I will” rather than “I can” when confronted by change?

A lot of things that matter to me are actually outside of my control.  I can’t change facts: experimental data will be what it is, and arrive when it’s ready.  Sadly, I can’t change people’s perceptions: they often persist in believing  what they will for reasons entirely their own.  My knowledge is piecemeal; my power to act is limited in both timing and intensity.

What I can control is how I think about things, what meaning and significance I give events and how I let other people constrain my actions.   I am learning that exercising control is more about how I choose to yield it than about how I assert it.

I was invited to a friend’s for dinner the other night where we talked about someone who had lost a leg to illness.  He had refused to let it stop him in life, adapting his physical abilities to overcome the limitations of his handicap (hopping up stairs without aid) and completing significant academic work at Cambridge.  At the same time, he struggled in relationships, beset by need and over-reactive to his partner’s moods.

It’s a big difference, and the reasons seem almost solipsistic.   His successes are driven by asserting positively over himself (I will), his failures by yielding negatively to another (I can’t).

People overcome  adversity and assert control in many ways: enduring, waiting, witnessing, complaining, fighting.  Often, though, and too often in my case, strategies are deployed against events and perceptions that won’t be changed.  Knowing the difference between the illusion and the reality of control is probably key to reducing stress as well as increasing success.

What is control: power or perception?  Or perhaps it still comes down to self-control: keeping my work and my relationships within limits and in balance. 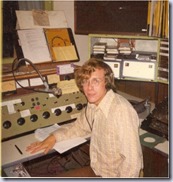 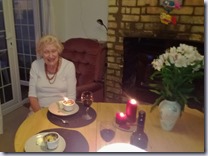 My next-door neighbor is celebrating her 83rd birthday – lovely to be able to share the event.  A bit of duck l’orange, a little chocolate pudding, a fair amount of wine, and a lot of conversation. The world keeps on turning, and we’ll be fine.

‘Clearing through the Pocket articles that I’ve been saving: there were a few things that I wanted to touch on.  Otherwise, a busy day with experiments and too may lawyers, hopefully both leading to good ends sometime soon.

The new Nexus  7 is out, with front-facing camera and higher-resolution display.   I’ll probably upgrade later this year, it doesn’t look particularly compelling over what I have for now.

But  a couple of things that I am more actively engaging:

IFTTT:  The more I use this, the better I like it.  “IF This Then That” is an automation generator for web applications.  It connects to the API of dozens of web services, from time and weather to social media, phone, and home services.  Using a very simple interface, you specify create actions depending on triggers.

So, for example, when I put a recipe into Pocket, it immediately posts to Twitter as Duck a l’Orange Recipe http://bit.ly/12V3UJR French cuisine made its debut in America thanks in part to this famous duck a l’orange.

There are lots of examples to show what’s possible, and promises to extend both the IF and THEN logic. It’s simple and elegant and really useful.  Imagine IF time = dusk, THEN Turn on lights at home, or IF friend posts status THEN send me an SMS.  This is the personalized future of web applications.

ChromeCast:  Another simple ides: stream to your TV from your computer.  It’s a $35 dongle that plugs into the HDTV port,  it allows me to stream applications from my Nexus to a monitor over WiFi.  I can control playback and volume from the  table.

“What’s smart is that it’s stupid,” say the reviews: I’ve ordered one through Amazon US since it’s not available in Europe yet.

It’s blazingly hot in Cambridge, forecasters blame a bubble of warm humid air from Spain and the pre-dawn was thick with thunderstorms.  Sleep still comes slowly and departs early, and the extra hours are keeping my resolutions to tame work and balance better.

I’m still fixing my tech: eBuyer ran out of stock on a new netbook so I had to re-order elsewhere. My beloved camera died and its off to repair; my phone was returned unrepaired by O2 and is re-returned.  The internet and house power are slowing and disconnecting in rhythm with the weather.

So life eases back towards quieter pre-internet living.  I’ve rescued a few more plants and my container-herb gardens are thriving.  Duck is better cooked slowly than quickly, but it doesn’t keep for leftovers.  My fish pie is rubbish but I make a killer fresh tomato soup / gazpacho.  My shoulder improves with just a bit of swimming (that hobby started on a bet). And the neighbors are dropping by, sometimes with good tidings,  sometimes bad, so long  as there’s mint for the Pimms.

Some things about British summers are eternal. 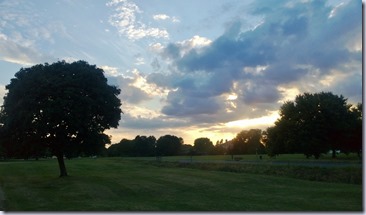