The gates to the Vrijthof close at 5:30 sharp, so I arrived early to watch the rehearsals.  A friend from college commented that “People make fun of Rieu. But he has introduced a new generation to (some of) the classical repertoire, and as another classically trained showman once famously remarked, he laughs all the way to the bank…”

I replied that  He loves what he does and he does it consistently, well, and on a huge scale. Maastricht is a homecoming for him ever summer and his local audience adores him.”

That means three weekends of sold-out weekend concerts this summer. 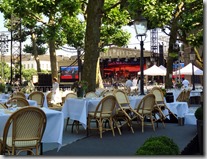 The restaurants along the Square offer drie gangen menus for 60-80 euros per heat.  This is exclusive of wine, so the evening bill for a small group could easily approach 500 euro over a five-hour evening.  ‘maybe next year… 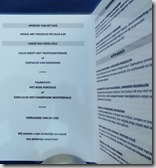 But what an evening.  The perfect summer night, the lavish stage sets and performances, the café’s going all out to provide a gourmet experience.  I turned over menus: heavy on truffles and Carpaccio for the appetizer, on beef and cod for the mains, on soft cakes and ice’s for dessert. 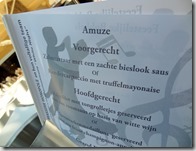 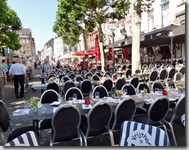 Even the ‘cheap seats’ with good views of the television at Vrouwplein and Sint Amorsplein were going for 40 euro a head, similar menu but only an indirect experience. 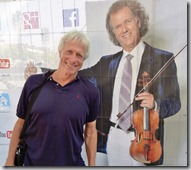 I ended up with a beer and a book along the Maas, at the Le Cle beneden mijn appartement.  There were a half dozen of us there, but the owner said the crowds would come.  The fireworks went off at midnight, crowds swelled across the Stone Bridge, and the Cle filled with people jostling for chairs.  ‘Everyone in buoyant spirits.