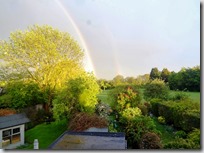 Each time I fly into England , I have to fill out a Landing Card.  Name, address, passport, family, occupation: my identity.  I usually put “Scientist”, not strictly true, I suppose, but it does describe how I think of myself and who I want to be known as.

I also define myself as I’m seen by others, a job title, personal relationship, or hometown,   But, more deeply, I have  a personal identity, persistent qualities that describe and define me, that set me apart from other  people as unique and exceptional.

“I am an expatriate” is one of those qualities.  I am someone who has chosen to leave home to live in another culture, to experience life and form lasting relationships away.  It’s different than living an identity in my home community: I’m creating one in someone else’s.  It’s not ‘fitting in’;  it’s purposeful.  I am discovering who I am and building who I want to become.

The heart of the paradox is that I also have to be tolerant and adaptable.  The Big 5 Traits of Expat Success stress the importance of extroversion, agreeableness, openness, conscientiousness, and emotional stability.  Very few long-term expats write about it, and little research has been done.   But balancing conviction and change to preserve who I am is the most difficult and stressful part of the expatriate experience.

The long-term expats who I know, by definition successful ones, are curious, confident, optimistic, and committed to making a complete life within their adopted culture.  But, to an even greater degree, I would characterize them by their rootlessness: the absence of strong ties to people, places, community, or jobs in both their adopted and their home countries.

And that leads to key questions about personal identity.

I’ve taken on this challenge of building a new facsimile from the objects, tasks, routines, events, language, and  history around me.  I’ve sought out and committed to connections with local people.  I became whole in my adopted home, with an image and a narrative that describes a vision and a future.

But it’s situational, fragile, too easily lost when an apartment ends or a connection fails.

The paradox, and the existential stress, is that expatriates are the most likely to need a strong personal identity yet least likely to have the means to sustain one.  And that rootless search may be the signature characteristic, and the defining problem, of expatriate life.