“The rush of battle is a potent and almost lethal addiction, for war is a drug ingested for many years.”

— Chris Hedges, War Is A Force that Gives Us Meaning

War correspondents can become adrenaline junkies, writes Hedges.  Ian Stewart of the AP similarly reflects on  his time in West Africa, his excitement at being first to cover a story, of bearing witness to atrocity, and, perhaps, of making a difference.

But, for both correspondents, as for many others, danger became the focus of their lives rather than a hazard: They became addicted to the rush of simply being in dangerous situations.

Excitement or fear causes release of adrenaline, the ‘fight or flight’ hormone that temporarily increases physical and mental function, enhances feelings of well-being and confidence.  A line is crossed when individuals begin to seek situations that trigger adrenaline release,  stress as a substitute for boredom.

Psychologists point to a cluster of indicative symptoms:

–Feelings of guilt when idle

–Obsessed over things that are left undone

–Strong compulsion to always be doing something

Shift to a summer’s afternoon with friends: the lazy breeze stirring heat reflected from the house, iced tea and conversation.

I wonder if expats have the same need to seek stimulation from new situations? I offered.

‘Might explain some of the difficulty in repatriation,’ muses another.

“Just another type of anxiety disorder, stress-seeking rather than stress avoiding,” shrugs a third.

Even moreso for the entrepreneur than the expat, although both are at risk.  And a debate launches. 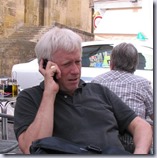 Very few entrepreneurs intend to sacrifice their family, health and happiness. Yet most do. Business leaders believe they can achieve work-life balance if they just try a little harder, or do a little more.  (Whetter, 2012)

Entrepreneurs will tell you about their endless list of responsibilities and all the people who need their attention. And while they’ll complain about their situation, they’ll quickly brush off any constructive advice from spouses, friends or co-workers who “just don’t understand.”  (Lencioni,2005)

Entrepreneurs feel truly energized only when handling challenges and problems. We thrive on risk-taking, juggle many tasks at once, and when things are really bad, we’re able to leap tall buildings in a single bound. (Abrams, 2012)

Entrepreneurs think they want balance, but they really don’t. We like swinging for the fences, and here is the weird part — we actually enjoy the insanity of long hours and long odds.  (Oxford, 2013)

When they come to the conclusion that they’re working harder than ever, with less results and personal satisfaction, frustration only increases.  This leads to decreased job satisfaction, increased stress, and more time at the office, affecting families in profound and painful ways. (Lencioni,2005)

Sustainable success is all about creating boundaries. Building a successful business, while also building a successful life and family, requires enforcing limits on how much you work and learning how to turn off from work when you’re not there.  (Whetter, 2012)

Acknowledge the problem and the need to change. Give peers explicit permission to say ‘stop’ and ‘no’. Finally, confront the underling issues. (Lencioni,2005)

Fast growth means all-in, 24/7 for the mission and success of the company. Balance is snake-oil that says it can all be pretty and nice. It can’t. But I think setting boundaries can help. I think boundaries are about bringing maturity and intelligence to the fast-growth life.  (Oxford, 2013)

I think that lifestyles associated with heightened stimulation, whether war correspondent, expat, or entrepreneur, carry with them a risk that the adrenaline takes over.  It’s a difficult thing to see objectively, and I would suggest that planting a few firewalls, trusted people who can pull me out, look me in the eye, and say it’s time for change, are key to keeping both boundaries and balance intact.

Otherwise, as Fitzgerald said, “Show me a hero and I’ll write you a tragedy.”