The birds are starting to gather above the Maas each evening, flocking and wheeling before migrating south.  And the  streets are filled with new students at Maastricht University, flocking and biking, filling the squares and spilling along the streets.

The weeklong celebration of New Student Orientation is in full swing, clusters of students in identical hats or shirts consulting maps and lists as they learn their way around the city.  I can’t recognize all of the languages that I hear, pushing through them, but the institution looks like it’s pulling in young people from almost everywhere (nearly half of the 16,000 students from outside the Netherlands).  In a 1000 year old city, it’s surprising that the University is so young, founded in 1976 as a medical school, and so well regarded (7th in the ‘top 50 under 50’). 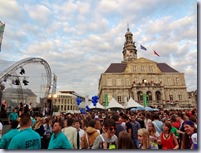 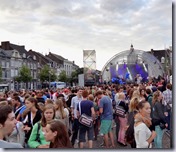 No Cambridge, but respectable.

I’m doing an Inkom myself, catching up with development and expat business this week, taking in a change of scenery, and enforcing time to reflect on events with a couple of friends.  I’ve made a lot of personal progress in the two months since, but still feel like life’s rearrangement, personal improvements, are far from complete.  It’s time for a ‘breather’, though, to assess how things are going and where they go next.

I’m enjoying quiet strolls along the Maas in the lingering Dutch light, a sit in the grass to watch the boats and bikes drift by, a few notes on leven balans en grens to expand on tomorrow.