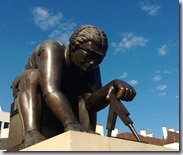 I’ve been on the road all week: London, Southampton, Poole and  Cambridge, angels and hospitals, critics and friends.  It’s meant a bit more windshield time than usual, some time browsing reading in outer offices waiting for appointments to arrive.  ‘Taken in the right spirit, it’s better than it sounds.

What have I learned? 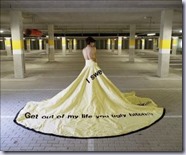 That Arnhem is hosting a “Fashion as Art” show, featuring works by Alicia Framis and others.  Details on the Museum voor moderne kunst site, of course.

That a Swiss saleswoman refused to show Oprah an   expensive handbag because she didn’t think someone overweight and black could afford it.  The article notes that upscale shops often assess potential customers with simple rules: As long as she is also carrying an expensive handbag or accompanied by a man who looks like he has means….  I’m dumbfounded that this still goes on.  In Europe.

The FT reports on the further deterioration of the Dutch housing market.  Austerity measures sap consumer confidence, household spending falls, and house prices follow.  They are currently down 21% from 2008, and 30% of all mortgages are under water.

A bunch of stories have appeared about my 5-2 diet, originally on BBC Horizon. It’s been rebranded “The Two-Day Diet” and has spawned a guide, website, and cookbook. I’m not sure why: you simply eat normally and then you don’t.  There is no cookbook (but then there would be nothing to sell…).

Lifehacker and NPR have both featured it, but my favorite bit came from the Telegraph: My children force-fed me to stop my mood swings from the 5-2 diet”.

Although I don’t blame the diet, I’m still not sleeping great: up every two hours and restless.  ‘Lifestyle is healthier than two months ago: I’m respecting the work day’s boundaries, a few hours morning and evening for a swim, errands and chores, variety in the kitchen and container pots.

Thyme has been a struggle though.

I can’t explain why: the books say it’s a matter of strong sun and dry soil, but mine still turns thready and dies back within a week.  The rosemary and parsley are fine in the same container, and there’s no stopping the basil and mint.

One forum suggested that the problem could be the source: there’s a difference between thyme pots for cooking and thyme for growing.  The garden store confirmed and put me on the right track: a hardier variety grown a bit more mature.

Same, to a lesser extent, with rosemary.

Then there was the Bubble Tea experience.  University of Southampton, a very Japanese corner of the Student Union.  Partly a coconut-milk and fruit smoothie concoction, but infused with little membrane-y flavour-balls.  ‘Hard to describe, but tasty and interesting.  It just needs some carbonation for a hot day to make it perfect. 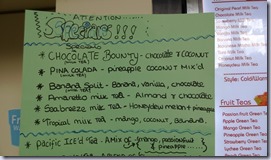 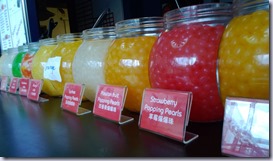 And I am trademarking the name “Smiles, Hugs, and LPTs” for a band I want to assemble.  Don’t ask…