The Alsace is a complex boundary more than a defined region: both German and French influences, blended with a frontier adventurousness.  I’ve always enjoyed it for the blend of villages and vineyards, places to explore against niches to linger in.  Especially in late-summer, the crowds have gone and inventory is cheap, the restaurants are slow but the chefs are seasoned, and the vintners are cutting deals on old wines to make way for the young.

The weather couldn’t have been better, blue skies arcing over and green fields.  The pillowy pastel plaster walls glowed between traditional timbers, bright light in the squares against deep shadow in the alleys.

Incongruously, there are Barbary Apes in the Alsace.  Native to Morocco and Algiers (and infamous in Gibraltar), they have found a home at La Montagne des Singes, a nature reserve above Kintzheim.  The park is clear forest threaded with a meandering path:  visitors watch the apes and, to a limited extent, interact by giving them a tidbits handed out by the staff.  There are interpretive signs and lectures (French and German only) and lots of families visiting: it takes about an hour to tour. 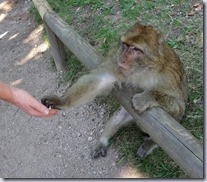 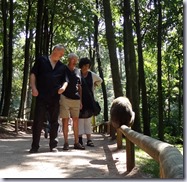 It’s easy for animal parks to become exploitative,  bad for anima’s health and people’s perceptions, but this had the feel of the savannah exhibits popular in zoos.  The apes clearly believed that they owned the forest, and were generally relaxed and busy, ignoring everyone.  There is a busy staff that answers questions and keep the people we’ll-separated from the simians.  It’s an interesting stroll on a nice day.

The big draw in the Alsace is wine, white Germanic grapes fermented in French styles.  I tend towards the drier wines rather than the fruitier ones, a pinot gris or riesling rather than a muscat or gewürztraminer. I spent time in the tasting rooms learning about two local variants, clevner and, especially, sylvaner.  The latter was the driest wine, tart almost to bitterness, but mellowed nicely if the bottle rested a year or two.  Very good bottles were costing 5-6 euro, far below the 20—25 euro price for serving in restaurants.

The best strategy is to drive the winding Route des Vins d’Alsace, stopping here and there when a modest winery strikes my fancy (family owned, good variety, a few cars and no busses parked outside).  They generally led me thought 4 different wines in some contrasting set: often age, grape, or palate.  A lazy afternoon is enough to grant some expertise in recognizing what to buy and getting a few good labels in mind, far better than the tasting experiences offered in the village cellars.