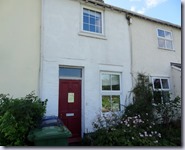 I returned to Barrington today – it’s been a couple of weeks since I was last in my little village outside of Cambridge, and I’ve given notice that I will vacate at the end of this month.  73 High Street was a gezellig spot for a year or two, but my life is moving on and it’s time that I did too.

The first surprise was to find a notice tacked to the apartment door advising me that the planning commission has received application to renovate the apartment.

The second was the discovery that several obvious items were missing from the flat.  ‘No sign of forced entry, so I assumed that the landlord had retrieved things while fixing the broken refrigerator.  I called to query, but she was as confused as me about the disappearances.

My next-door neighbor has the  only other key; she said that her gardener had requested it the day before.   Great.  My landlord, also an attorney, arrived and suggested that we both go up the road to talk with the family who does the gardens to see what had happened.

We told them they had one chance to make this right before we called the police, and they admitted to pillaging the shed, the garden, and the house.  It was astonishing: out came tools, kitchen items, table, chairs, statuary, things that were part of the  flat’s inventory as well as things that belonged to me.  I insisted that it all get put back; my landlord called a policeman that she knew to come over and observe.

The neighbors were completely unrepentant, refused to apologize and said that they were doing it at someone else’s request.  When I asked why, they shrugged and said they felt no responsibility to me since I was going back to Holland.  (Actually, I am downsizing to England’s south coast.)  My landlord asked how they could do this to a neighbor; they smirked at her.  The neighbor who (formerly) had a key (and received a chair in return for the key) similarly refused any explanation or apology, saying her conscience was clear.

It left both of us shaken, and moreso when we discovered that more kitchen and home items (including all the pots, pans, and dishes) is gone.  Some inventory is missing that I will have to pay for.  Worst of all, two spare sets of keys, hanging on a hook, were also taken, so they could come back any time.

My landlord went to the police on our behalf to report the names involved, the facts of the illegal entry and theft of items, and our continuing concerns for safety and security in the apartment.   But the police said that since a) a neighbor had given them the key and, b) most items of value had now been returned , they would open a file, check whether the group might have been involved in other petty thefts in the village, and put everyone on notice that they would be suspects in any future burglaries.

Oh, and if they broke in again, let them know?

For me, this event is very dis-spiriting.  This was my home for three years.  I have, especially over the past few months, struggled to keep it one, even as business and personal changes brought me to the understanding that that was time to leave.

I suppose that the event is not not surprising.  Villages are small, insular places that weave hard opinions from threads of baseless innuendo and gossip.  I’m an outsider, Swiftboated, not particularly integrated into village life, and probably for many reasons worthy of little respect.

Still, I cannot imagine what self-justifications were involved, why anyone involved would ever think that this was a legally or morally right thing to do. Everyone should be ashamed of themselves.  But  everyone also made their feelings clear when challenged.

So it is what it is, and I find myself with the sorry task of packing everything of value and moving them to safer places in the coming days.  Putting it behind me (or more prosaically, ‘cutting and running’’).

I remember how the realtor advised me never to move into a Dutch village when I arrived in Arnhem years ago, for exactly these reasons.

It now seems true, too, of England.

email
« The process of change
Moonrise over the Docklands »
Radar Weather