Monday was spent running samples from Nottingham to Portsmouth (don’t ask), so I dropped anchor in London ahead of early morning meetings today.  Hotwire put me into  a Novotel on Canary Wharf, cheap but not outstanding, until I went for an evening walk towards the Excel Center.

It was a dramatic twilight, the O2 dome lit, skycars silhouetted against the darkening sky, the cranes framing the rising mood.  Pictures don’t do it justice, but I fiddled with angles and contrasts for a while. 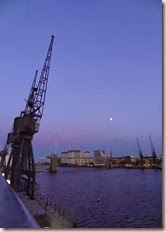 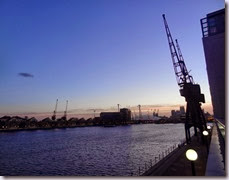 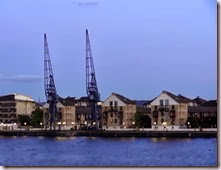 Then off to sample Lebanese lamb shank for a late dinner, finally a glass of Sicilian wine at a table along the waterfront,

catching up with new essays and jotting a idle thoughts and ideas.  ‘missed having conversation, sharing the moment, but that will come again.

I have a lot of debates, with myself and other, about whether my life is too fast, too stressed, too footloose.  But evenings like this, it’s a rare gem to be treasured.

email
« It takes a village…
Why cook for fun? »
Radar Weather