The British Museum is in the last month of it’s exhibition “Life and Death in Pompeii”, depicting everyday life in 79 AD.  Tickets have been hard to get: I booked mine online a month ago and then angled to be in London with some free time on the appointed date.

I visited Pompeii during a trip to Naples several years ago.  It’s an amazing experience: streets and plazas to stroll, houses and shops to peer into, and the omnipresent hump of Vesuvius lurking around every corner.  It feels very alive and immediate, even though there is nobody there, because the buildings and frescoes, cooking and living areas, are all so well preserved.

I wasn’t sure how the Museum could top the first-hand experience, but it really complements it well, focusing on everyday life arranged around a tour of a typical upper-class home of the period.  Starting in the street, moving to the atrium, bedrooms, kitchens, and dining areas, the artifacts are arranged and described in the context of how they were used by people living there.  I was surprised to see how recognizable everything was 2000 years later, how much glass was used, the foods and fabrics (charred black by the volcano’s pyroclastic heat), the whimsical fresco’s. 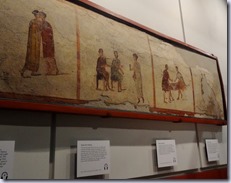 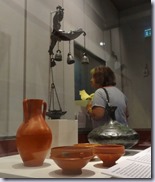 My favorite was an admonition to dining guests: Don’t soil the cushions; don’t make passes at other people’s partners; take your quarrels home with you.  ‘good advice in any century.

There is a lot of frank sexuality on display in the bedroom and garden scenes, nothing overly embarrassing or shocking, but surprising for the time.  There are some really lovely carvings of people in robes that look absolutely soft and alive, ribald depictions of drunk gods and grossly distorted males whose sexual organs support bells and candles. 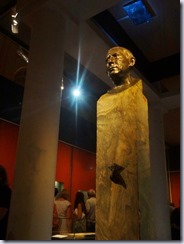 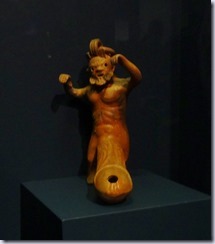 It takes about an hour and a half to see it all, and it ends with a series of life casts made by filling voids in the ash where people were consumed by the superheated clouds.

It’s a very sobering display, parents holding children, bodies and faces contorted as death arrived.  Jewelry glistening next to the blackened bones of the noble women who owned them, surgical tools carried to shelter by a doctor, good luck charms that failed to protect the servants clutching them.

It’s very saddening to look into the faces across the millennia, seeing so much that is familiar, so much of ourselves in their lives.