The euregionale kunstmarkt visited Maastricht this weekend, and  I joined friends for a tour of the stalls in search of something new and insightful.  For the most part, the works were uninspiring: more colour than flavour, meer warmte dan licht.

For me, three artists stood out.

Arjen van Prooijenn specializes in colorful works depicting my beloved Sint Servaasbrug, the symbol behind my company, Stone Bridge Biomedical.  Most of his works are reduced to postcards, but there are some nice full-sized works on display 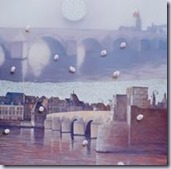 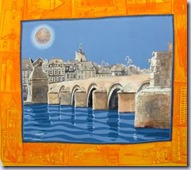 Peter Bertus executes technically exacting works in many media, but his etchings (etsen), the prints  from the plates, are the most intriguing examples for me.  Again,  local scenes but done with deft accuracy and feeling.  I’m starting to feel like I should commission something. 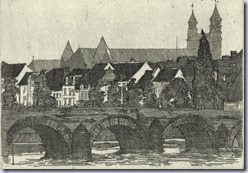 Wilma Schipholt is a sculptor (beeldhouwer) who makes figurative works (beelden) of great emotional intensity.  They are rough hewn, almost like a Giacometti, but  less ethereal and more solidly rooted in the earth off their feelings.  It resonates strongly with me as I close out a difficult summer and feel the first brush of herfst in the mornings.