It’s been 7 months since I was last in the US, not an intentional lapse, but just the way business and life has worked out.  this trip was both last-minute and short-duration, a mix of local business and family visits, back to the UK at the weekend.

As luck would have it, the St. Jude (Patron Saint of Lost Causes) storm hit full force on Sunday night ahead of my Monday departure. There wasn’t much rain, but gale winds vibrating in the Maritime Pines around the house.  The electricity stayed on all night, but the Internet departed by dawn.

I met the taxi in the predawn darkness after tossing my bags over the (unresponsive) gate and climbing over after them.  There was a foot of standing water in hollows along the roads; the waves were crashing against the bluffs, all white and foam.  Bournemouth terminal was quiet and the bus looked to be on-time.  But, checking the station, 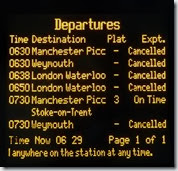 every train north had been cancelled because of downed trees.  A good morning to be on the roads.

I called a friend living near Heathrow, who confirmed torrential rains still falling to the north of me.  Nonetheless, the sun rose beautifully over the mists blanketing the New Forest, and skies were blue when I pulled into Heathrow.  Security was a hassle, but

the planes left on time: I even scored an upgrade to 1st for the transatlantic leg.

I usually have a rule never to transfer through JFK, and this evening was among the worst.  Lines were long at border control, and the new automated kiosks couldn’t make sense of my passport.  I joined a line only to have the woman in front of me faint dead away – she was fine, but it brought the agents out of the kiosks when I called.  The baggage reclaim and re-check was a mess, and I got to the head of the line one minute too late to have my bag transfer. 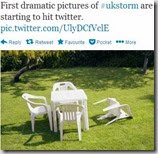 “You’ve been rebooked on the next flight, but will have to stay in New York overnight,” assured the agent.  My flight doesn’t leave for half an hour: there has to be a way.  She shrugged, pointed to a supervisor.  I appealed to the senior agent helping her. “If yu have no liquids, you can try to gate-check the bag,” she suggested.  28 minutes; I don’t have any way to find the gate here.  “Would you like me to escort you?”

Pride says I can do this; practicality says I’d be better off with help.  Off we went, zip through security, onto a cart, out to Gate 37 and on board with five minutes to spare.  My first time on a Rover: ‘kind of cool. 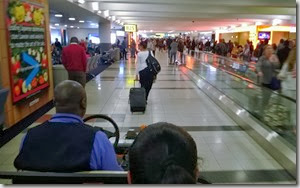 So I did get back to the Northwest, into my rental car, and up to Woodinville by midnight.  ‘not the smoothest trip, but I’m getting used to “winning ugly” these days.