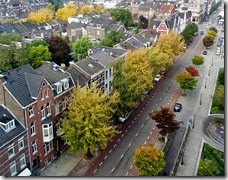 The drive from Maastricht took twelve hours yesterday, a record.

I had everything packed, the car pre-positioned and fueled, the alarm set.  Everything was loaded and I eased west around Liege on schedule at 8 am, headed towards the noon ferry at Dunkirk.  Stories played on the radio, I made the occasional ‘to-do’ and ‘to-write-about’ note for later.

But the traffic thickened, slowed, stopped as I circled around Brussels.

The skies darkened, lowered, burst as I sped across Belgium.

The police compressed, bent, and stopped traffic to avoid accidents and stalls.

So I reached the ferry dock ten minutes after the noon boat departed.  New Attitudes mean that I’m prepared to kick back and relax though.   I finished some reading (Poetry by Adrienne Rich, one of her 1980 essays, a book by Susan Brownmiller), then turned to planning and writing until the next boat arrived.

The crossing was calm, and the weather cleared as we approached England.  The Cliffs drew a stark white line between blue skies and cobalt seas.  Everyone took pictures.  Rain returned at the M25 Orbital around London, though:  the traffic crawled across to, and then down along, the M3 towards Southampton.  Then dragged over the New Forest moors.  Finally lagged into Sandbanks,

Happily, I had been invited to the Royal Motor Yacht Club for a 7:30 party.  Casual dress, so a nice shirt, slacks, shined shoes.  I turned my appearance and attitude around.

Ten minutes and I was back out the door to join the local business and sailing folks, eight in the car packed together and laughing.  One had the information about dingy sailing classes I’d requested, another had some suggestions for local angel investors, a third  just back from Hong Kong, the last reminding me that her sister was due in a few weeks.

It was a good group, and 12 hours of road wear fell away in minutes.

It also turned out that the Club was hosting a 70’s music Quiz Night: 81 songs that we had to know Title, Artist and Year. It was a two-hour delight: there are so many good tunes, good memories to sing along with and share stories about.  My forte turned out to be the Intro rounds: 10 second beginnings from the hits I used to cue up for my afternoon drive radio show.

In the end, we got fourth place: not enough to qualify for a bottle of wine but good for another round of drinks and conversation past midnight.#

‘good to be back in Dorset again.