The Jurassic Coast runs for 95 miles along the English Channel from just west of Swanage, near Poole, to Exmore, east of Weymouth.  A World Heritage site, it consists of high chalk cliffs with spectacular beaches and high walks through forests and across the rocks.  Folks had been recommending Lulworth Cove,  a particularly good spot about an hour from Sandbanks.  The weather is deteriorating dag na dag as fall settles in, still warm but wet and windy, so I took an early afternoon’s drive out to see it before the cold arrives. 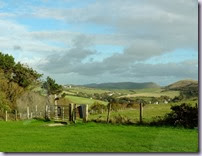 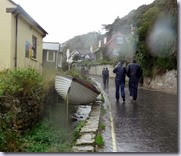 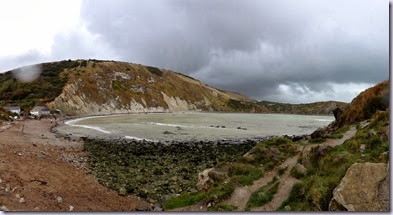 The Cove is almost perfectly circular with a small opening to the sea and high cliffs inland.  There was a large group of schoolchildren doing experiments at the shore and a few family groups visiting on half-term.  But the trails were empty and, while slippery in spots, not too difficult to negotiate (eg: I only slipped and fell, hand and leg in the mud, twice).

The lower stretches, rising from the beach into low forests, reminded me of walks in the Olympics, lush and dripping.  But once on the cliffs, the views open to reveal a long stretch of coast and spectacular views of the Cove. 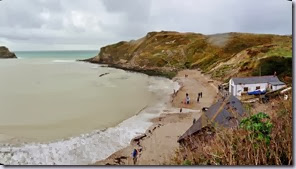 On the other side of the Cove is the Stair Hole and the Lulworth Crumple, a glistening fold of rock above a crumbling arched natural seawall. 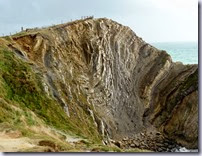 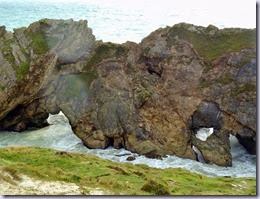 Further along the coast lies the  Durdle Door, an arch reminiscent of the often-painted Manne-Porte at Etretat.  The sun came out as I hiked down to the formation: the cliffs lit up and the waves glistened.  I can see where this would be absolutely wonderful on a sunny day or when the light was changing color. 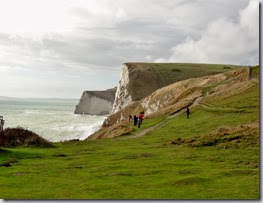 ‘Well worth a visit, it takes about a day to explore properly, longer if you want to hike or horseback ride the beach trails.  I’m already making plans.