The skies were blue and the sun shone brightly over the Old city centre today.  It’s the first day that really felt like autumn, the right colours, the crisp feel to the air, a scent of leaves and spices in the air.

I was up early to move the car and take a walk across town; thesun was just rising over the Maas at 7 am.  It will likely be a late night tonight as PopRonde hosts music venues  in bars all night. And taxes to look forward to on Sunday…

It was a perfect day for taking new cover shots for the blog’s Facebook Page north from on the High Bridge.

I’m pleased that the page has reached a critical mass of Followers and is behaving like a “real” site now: please join if you’d like push notifications in place of the RSS feed. (I’m also on Google+, but at a much lower level of activity).

And if you’ve already subscribed, many thanks!  I genuinely appreciate your interest and comments.

But, I digress.  Back to Herfst. 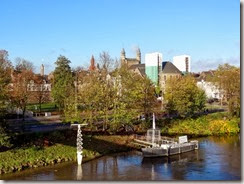 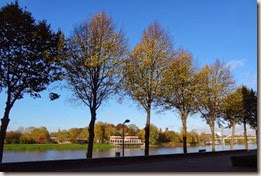 The trees are finally showing colour, as the river swells due to  runoff draining from the Ardennes. The barges are laboring upstream, engines vibrating against the current, as they thread the Sint Servaasbrug.  Everyone above is bundled and huddled against the wind,intent on their errands and warmth.

The Christmas lights have re-appeared at the Mosae Centerand the Vrouwplein; the touring boats have closed down for the winter (joining the shuttered drug barges). The streets glisten in the evening with a coating of fresh rain.

It’s a familiar rhythm,comfortably repeated year after year through the city and along the waterfront, . 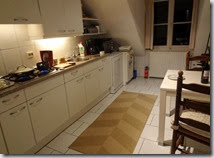 It’s nice to have my kitchen back, and I dug into making a variation of British Kedgeree with spiced lamb filling in for eggs and haddock.  Although I followed the recipe to the letter, the rice overcooked (or was overwatered) and the lentils undercooked; the dish seemed under-spiced and needed more sultanas.  I’m split on whether to give it another chance. 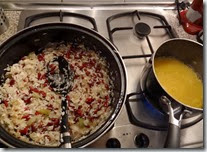 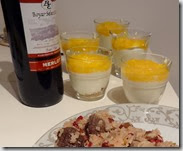 My Mandarin Orange Coulis was excellent, though.