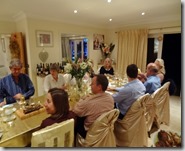 Thanksgiving dinner was a delight, the house crowded with people, lots of new faces to meet, good catch-up with familiar friends.  My cranberries set, my stuffing was tasty, and the Dutch cheeses and fig breads were well received.  The other Americans brought pumpkin pies and champagne and did their best imitation o the US event.

One of the guests was a professional tenor who has performed in several West End plays: he was kind enough to sing a selection of Italian and Theater classic between courses.  Everyone agreed it made the evening Amazing.

There was lots of good reminiscing about the best domestic and expat Thanksgivings.  I particularly remembered dinner at my grandparents and the family ‘do’ in Maastricht a few years back.  And the evening my son and I shared Thanksgiving together, just the two of us, the day after my daughter was born.

We cleaned up tables and dishes for an hour after everyone drifted home, rolled to bed late, slept soundly, early to work (and laundry) today.  I woke to find that the Dutch had lost their AAA credit rating from S&P, a hangover of the housing bubble, high unemployment, and lax consumer spending.

I’m trying a much more measured, paced, focused, communicative approach to work this month, a few key goals and whack them daily until they are resolved.  It’s gotten a number of knotty issues under control, so I’m encouraged.  Samples appear to be drying closer to schedule, incorporation issues are resolving, 2012 taxes are almost paid.  And I’ve got a lovely weekend ahead: Het leven is goed tijdelijk, maar hopelijk op een dag blijvend.…

1)  The Babraham Institute has posted a promotional video of the pitch event that I participated in: I appear briefly at 1:15.

and, embarrassingly, practicing my pitch in the background behind another interviewee at 1:21…

2) Who knew that the new etiquette was to put a period onto a sentence when you want to express disagreement?

At least it gives me a way to distinguish the positive ‘I don’t mind’ from the negative ’I don’t mind.’ when dealing with the British.