The big Sandbanks Birthday Bash kicked off with a Lionel Ritchie tribute night at the nearby Harbour Heights hotel, a  delightful summer venue for sipping coffee and watching boats on the harbour.  This evening, it was all sweet wine and savoury dinner,  then dancing and conversation until one in the morning.  The faux-Lionel was well-voiced and performed a good-humoured mix of Richie’s canon, easing everyone into the weekend. 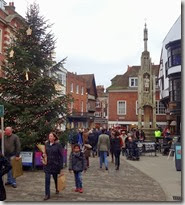 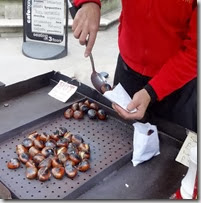 I opted out of Day 2, preferring to explore the historic city of Winchester with the wonderlijke wezen.  Best known for the eponymous Winchester Cathedral (hum a few bars) and Winchester Castle (Round Table and all), it’s a short distance north of Southampton on the main rail and road lines connecting London with Bournemouth.  The city was the capital of England during the 800’s, but has more the flavour of a market town than a royal seat today.  It was cold and grey, but absent rain it was perfect for wandering the old city streets and investigating the Cathedral.

…and correct me if I’m wrong in choosing wandelen door, to wander, as opposed to dwalen over or zwervend, both of which have more of a loitering connotation.  ‘still learning, every day. 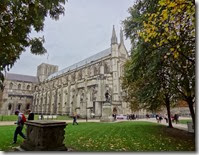 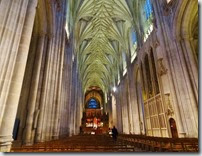 Winchester Cathedral reminded me a lot of the ‘”Ship of the Fens” up in Ely, an outsized sprawling structure with a wonderful fan ceiling, long naves and decorated transepts.  It’s expensive to enter at 7.50  gbp, but I took that as encouragement to linger and read.  The choir was preparing for their annual performance of the Messiah, so there was dramatic lighting and soaring voices to accompany the visit, a fortunate touch. 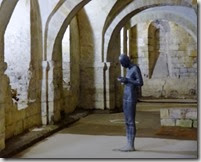 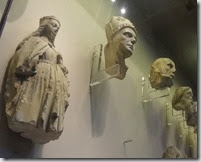 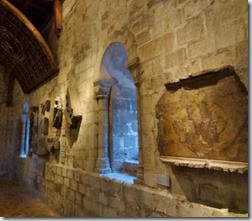 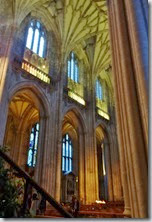 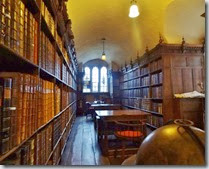 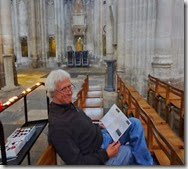 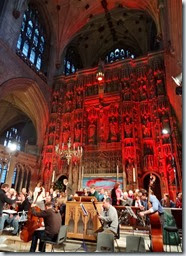 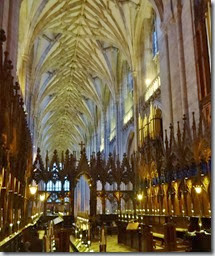 People tend to linger at Jane Austin’s tomb (which I accidently walked on) and the Antony Gormley statue in the crypt (more my style).  I thought that his mysterious blue figure, cast from Gormley’s own body, was holding a book, but I’m told that he’s actually cupping water.  During rains he can be found up to his knees in groundwater so I’m sure its all linked.

The library and illuminated works are a musty delight, and there are several museum areas where antiquities associated with the cathedral are on display.  As with any organic structure, especially one that’s been extended and decorated over millennia, the best bits tended to be the small surprises: cat’s head cornices along one wall, a chapel themed as water evoked by sinuous wood, and a memorial to writer Francis Francis (actually buried in Twickenham), whose fishing friends clearly knew him best. 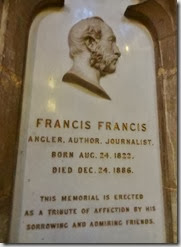 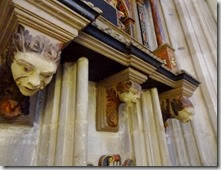 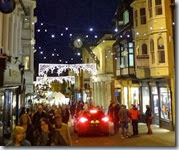 ‘Then out for wine, chestnuts, lights, dinner, and a good close conversation – the sort of generally relaxed airing that clears the tension from a difficult week.