The bearded figure in the leather coat was unrecognizable.  He sat, holding a book and crowned with satanic horns, in a display of “Christmas Around the World” at Crossroads Mall, east of Seattle.  I checked the descriptive card again.

The descriptive text was broadly correct, but I remember a more child-friendly version filling the stores and shop windows around Maastricht: 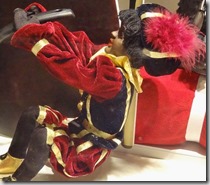 And it fits with the general perception that  “European Christmas can be quite scary”. ‘just like their ‘socialized’ health care system.

There’s always a little dislocation returning to the United States after  long time way.  I have to remember to drive on the right (yes I know that they drive on the right in the Netherlands too, but I always bike or take public transport around Maastricht, and mostly only drive when in the left-handed UK).  Tax will be added at the checkout (at only half the rate of European VATs).  Leave more time for distance and traffic when picking things up at the store (then double that to be on the safe side).

I’m busy with my annual Christmas Cookie Bake, a production line of  rugelach, cut-out shapes from a family recipe, and Bourbon chocolate balls.  It’s easier to buy liquor in Washington State than it used to be, state-owned stores giving way to well-stocked spirit-aisles in every grocery.

The new plastic bottle was crowned with a new ‘child-protective’ cap — or so I thought.  It actually turned out to be an anti-theft device that the clerk forgot to remove.

And, embarrassingly, I proved to be totally inept at manoeuvring a French rolling pin.

‘With or without prior bourbon.

I worked on dinner for my daughter and her boyfriend as well: a crab linguini main and panna cotta dessert.  The stores had wonderful crabs (I do miss the Northwest’s fresh

seafoods when I’m in Europe), and the technique for cleaning them came back easily.  Strawberries are available here, so the coulis topping was a hit. We had a tuile competition that yielded some inventive butterflies and snowmen as garnish.

Despite the staggeringly large food selections in local stores, it’s a challenge matching up ingredients with those from Tesco or Jumbo. Gelatine leaves are unknown here, Knox only offers powders,

and they are much harder to handle than the sheets.  Cheeses were a bit tricky; Belgian beers and chocolates were surprisingly available. Strangely, waxed paper has disappeared from shelves in the US as well as in Europe: parchment paper is the substitute everywhere (no objection except for the cost).

With all of the rushing about and remembering to play by local rules, I managed to lose my Nexus 7 along the way.   I wasn’t sure how to backtrack, but then remembered

that I had left the location-aware services engaged on it.  I logged into Dashboard and, sure enough, it was pinging from a grocer in Bellevue.  A (not-so) quick trip back: I found it waiting in the QFC and was back in business.

Clearly, a Dutch Sinter Klaas was on my side, rather than the locally satanic Black Peter.  And it’s a good reminder to set up the capability to do a remote shutdown and wipe of the device if necessary.