What’s the best cure for a week of pushing the baubles forward a few inches for the various businesses, joining the cooks for expat Thanksgiving, and restless nights too filled with lonely worries?

A weekend in London, of course.

It was a carefree and delightful break – a good musical, some decent Thai food, a provocative art exhibition:  ‘civilized breakfast, laughter over strolling lunch, and late-night wines.   The decorations were out, fully lit a festive backdrop to the Christmas shopping crowds.  Covent Gardens (above) were particularly good, along with the Parliament display.

The theatre afternoon was Billy Elliot,  telling the story of the son of a Yorkshire coal miner, destined to join the Royal Ballet.  The staging was good, with strong performances in the roles of the parents (especially the father), the gay best friend,

and the shadow dancer.

The politics of the miner’s strike against Thatcher were almost superfluous and the counterpoint to Billy’s rise wasn’t an equal balance of drama. (The Pitman Painters captured the idealism and class struggles better, although from a different period). Nonetheless, it reminds me that, even in societies governed by Rule of Law, an elite gets to make and interpret the Law for themselves and for others.

Politics aside, the scenes of the father coming to terms with his son’s ambitions tugged at me, as did the grandmother’s memories of her husband, a horrible person apart from being redeemed as a lovely dancer.

The exhibition was Pop, Art, Design at the Barbican, a fascinating exploration of the sculptures, paintings, and found objects of the decade that consumerism merged with art.  I thought that there were two parallel themes.  One was the elevation of advertising and design to the level of art, as in the Braun design of a toaster (Braun was clearly the Apple of it’s time, aspiring to elegant functionality with Richard Hamilton anticipating the role that Jonathan Ive filled decades later). The other was art’s critique of consumerism, playing with the images and slogans of branding and advertising in both admiration an warning.

Andy Warhol was included, but his works were less imaginative than many of the other works on display. 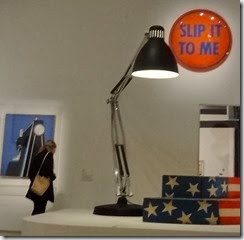 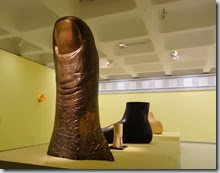 Getano Pesce’s Moloch and Up were appealing, as was Gunnar Andersen’s Portrait of my Mother’s Chesterfield Chair.  The show notes were gibberish, there was no Peter Max or moiré art, but the groupings were well chosen and the exhibit made me think (as well as the Guardian).

My favourite part is still to pause at the end, balcony overlooking the gallery, and discuss which works connected with us, and with one another, best.

All in all, a lovely time with shared with the seasonal trimmings, w_wenzen, and the City.  ‘Off to an 8 am ferry in the morning, though, back to Maastricht for work and markets through the coming week.