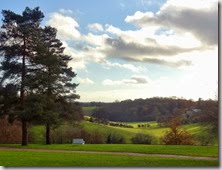 It’s the first weekend of a new month, traditionally time to catch up the accounts and send the invoices.  Or to take a crisp walk in winter woods, explore a new town, take in dinner and a movie.

Okay, its an easier choice than it once was.

The movie was “Saving Mr Banks”, the story behind the making of Mary Poppins.  I enjoyed it thoroughly: the clash of

British and American cultures and values, Walt’s enthusiasm for his company, people, and projects, his quiet determination to understand PJ Travers, were fun and mirrored experiences I’ve had. It ended a bit too neatly (in fact, she took small revenge years later by never allowing another movie to be made from her books and by forbidding any American to be associated with the London stage adaptation), but was a thoughtful and well-inhabited drama.

The parallel story about her father’s descent into alcoholism while she was growing up in Australia was very poignant.  I think that Fathers and Daughters have a very deep and special relation to one another: women always speak wistfully, glowingly about the little things that their fathers did with and for them growing up, how he made them feel safe, special, and valued.  It’s double-edged:  especially hard to live up to as a partner, yet especially rewarding in raising a daughter.

Greys Court is a 16th century mansion in the Chiltern woods outside of Henley-on-Thames.  Its out of season for the gardens, but the house was decorated for Christmas (not so lavishly as Andre Rieu’s, but quaintly for the period) and the staff was serving cookies.

The kitchens, bedrooms, and grounds are all basic and arranged around the practicalities of self-sufficient living in the countryside: today it would almost be considered monastic.  And, actually, the expat entrepreneur lifestyle has more than a few things in common with it as well:

I tried to get permission for a couple of pictures of the decorations but was politely turned down.  I’m not sure why so many National Trust interiors refuse non-flash photography: most people only want the memory and share with friends.

The w_wenzen and I took the long circle walk though the woods, all yellow light and deep leaves.

The path circled the estate widely, I was starting to doubt that it circled at all as the shadows lengthened with no Manor House in sight.  The stillness beneath the branches, the kites circling above, the round sheep and the rolling hills stretching off into the distance: it’s a nice cap to an afternoon.

‘Much better than doing the accounts.