Rising ocean temperatures will drive more energetic storms.  It’s not a controversial link: MIT meteorologist Kerry Emanuel comments that there’s this excellent correlation between hurricane energy and the temperature of the tropical ocean…  The amount of energy expended by hurricanes has gone up in the last 50 years by somewhere between 50 and 80 percent.

The fictional result are superstorms that plunge the world into a new Ice Age.

The realities are the windstorms and driving rain that have enlivened the past couple of months in Cornwall / Dorset and the Netherlands.

The fictional map is in the upper right (UR): the other three charts record the New Years storm over the US (UL) and the Christmas Storm over Britain and the Netherlands (LR), connected by the jet stream arcing over the Atlantic (LL).

Which brings me to today’s soggy travel experiences. 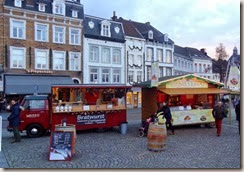 I wrapped a very full day in Maastricht with a deelde bierje met mijn vriend as torrential rain and lightning lashed the ‘Skade outside.  A 10 am flight from Amsterdam to Southampton meant a late night run to Schiphol Airport and an early rise, so i caught the train north.  And, at Utrecht, things ground to a halt.

Not global warming, but a hot fire in the train tunnels under Schiphol.  The conductor recommended waiting things out at Amsterdam Centraal, but my ns.nl app suggested a roundabout way through outlying stations.  A small group of us followed the route through empty stations and wind-swept platforms to finally arrive on the only functioning track at Schiphol, still smelling of smoke in the deserted station, at 1 am.  It was just in time to catch the last hotel shuttle, so I was blissfully in bed at, well, 2 am. The latest storm was due to graze the south coast of England this afternoon, so I thought that I was well ahead getting across and onto the train before 10.  Or so I thought: Gusty winds slowed our approach, the UK Border Control took an unnatural interest in my residency, and every ticket machine at the train station was broken.  We were out of the station an hour late, and then immediately stopped by a stranded train blocking the tracks. 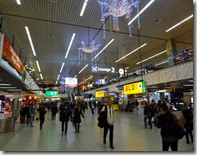 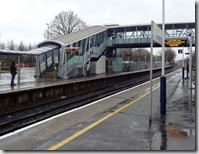 The rain pelted down; stretches of the New Forest were under water as rivers ran fast and brown through the tree.   The wind shook the rail cars as we crossed the green, drowned landscape.  Then Bus 50 from Bournemouth to the Shore Road, and finally a long walk home through the rain, passing downed branches and flooded streets. 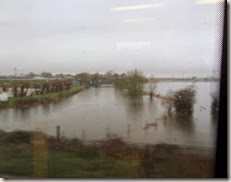 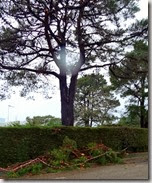 And apparently things had been worse in the prior days: these are pictures of  the surge that came over the Sandbanks seawall at Christmas. 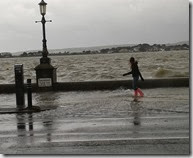 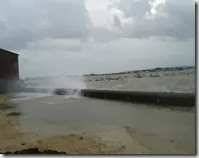 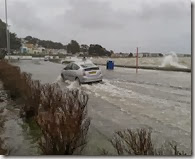 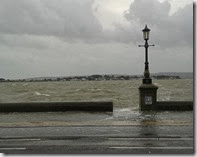