The sun came out in Sandbanks today: the kitesurfers took to the water and the Jazz Café filled with sunbunnies.  It could almost have been summer (and I was really ready for a sail!).

But a closer look showed the swimmers covered with drysuits; the diners bundled in overcoats.  Cars lined the beach near the Chain Ferry, each with a couple or family eating lunch insulated against the cold. 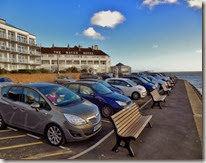 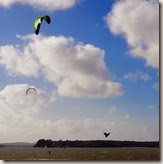 There were lots of walkers along the beaches, evenly split between hand-holding couples and solitary folks with pets.  Children tumbled down sandpiles left  by the bulldozers that clean the promenade each morning.  The men inspected a huge channel buoy that had broken loose and washed up overnight. 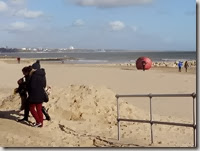 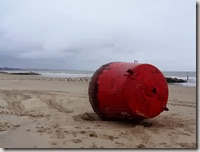 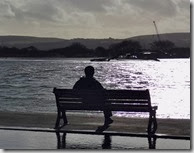 Squally, thundery, Gale Force Nine… warned the Met Office.  A huge low-pressure system, another “once in 100 years” storm was bearing down on the coast.  For the next 48 hours, winds up to 90 mph and torrential rains were forecast.

Last night I drove down from Cambridge in driving rain at midnight: huge puddles of standing water on the M3 at Bournemouth that were thrown across the motorway from the opposing side.  The two-hour backup on the Orbital was almost a respite  (accompanied by an annoying interview with writer Anna Holmes, claiming that men act kindly only to exercise a “benevolent superiority” over women and to gain competitive advantage over other men).

Anyway, the storm blew itself out and today went well: knotty problems were solved, there was time for chatting up friends, completing accounts, an hour’s exercise and read, setting up two working groups, and a good walk in the wind and sun.

And, from Branscomb Beach at sunset, the forecast next gale was literally in view as it surged over the Isle of Wight.