I had never been particularly fond of Paul Klee: his painted works always looked crude and blocky, childish abstractions over dark earth tones.  A Swiss painter, I placed him as a secondary talent, harmless art alongside the main road from impressionism to modern.  Static / Dynamic, left, seemed typical.

So I didn’t expect to spend much time in his retrospective at the Tate Modern yesterday.  I was really surprised, though, to find a wide-ranging and inquiring artist whose works explored and evolved through 17 rooms of canvases, chronologically arranged.  I’m still not sure whether he was a great painter, but he was a thoughtful one and I admired the ways that he tried to interpret what he saw in a personal language of color, geometry, and symbolism.

His earliest works were recognizable studies of villages, mountains, gardens, but they decompose quickly to geometric forms that represent the scenes rather than simply depict them.  He experimented with prismatic watercolours and contrasting fields of primaries. 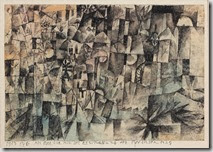 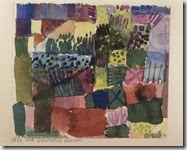 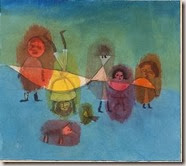 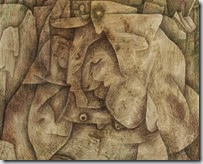 When Klee joined the Bauhaus, he worked alongside Kandinsky and taught design and composition: the connections between them are obvious.  He thought hard about the principles underlying symbolic and abstract representation of sensory and cognitive impressions, writing longhand lecture notes in precise script,

illustrations flowing across pages of personal journals and published articles.

From this, I came away with the image of a very focused detailed artist.  The works can be almost boyish: I remember my son making grids, filling in colors, adding curves, spending hours on a complex doodle.   The difference with Klee is the rich symbolic language that the exhibition develops, so that the later paintings become much interpretable for having seen the earlier ones. (The Guardian has an excellent review). 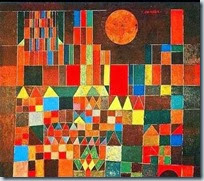 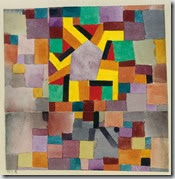 Interestingly, he represented his symbolic self similarly (Ghost of a Genius). 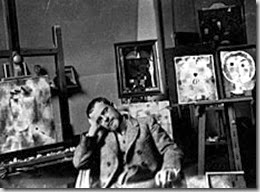 He worked to try to capture mood and movement: his scenes of fish, aquariums, insects, and ships are particularly good.  Many of the paintings seemed really muted and dark though – I wonder if the colors have faded or they were created that way. 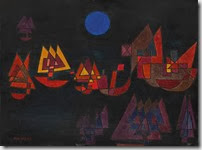 There were works that ventured into political commentary (Remembrance Sheet of a Conception), others that experimented with techniques such as pointillism (Dancer). 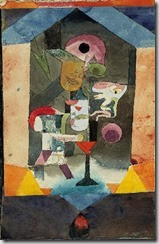 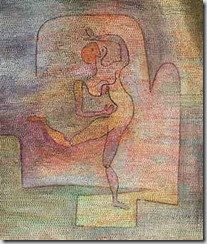 His drawings over colored backgrounds, Threatening Snowstorm and Walpurgis Night, were particularly good. 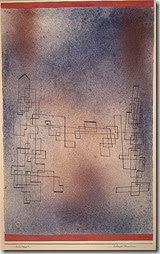 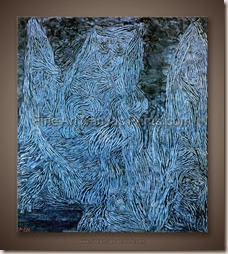 It’s much better and more thought provoking than I expected, really placing Klee’s thought and contributions into a nice personal context.  Visible through March 9 in London, ‘definitely worth a visit.