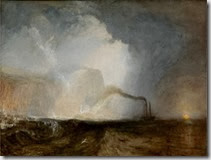 JMW  Turner is, for me, England’s best painter.  He was a Romantic painter, working in the early 1800s, trained in classical styles and talented across media.  But he was also strikingly modern, with intense color and energetic brushwork that conveys motion and atmosphere.  I really enjoy his style and his works, and his paintings of the sea are among his best.

The National Maritime Museum has a stellar exhibit of his works, visible through April and a bargain at 10 gbp admission, that gathers many of his best oils and watercolours together with commentary and contextual paintings by his contemporaries.

Close up, I was first impressed by the size of familiar works, many times larger than expected.  I know the techniques that artists use for these canvases, but it’s still hard to envision. The second was the depth and intensity of colours, especially in his oil paintings.

Similar works by his contemporaries (Darby’s sunset between two of Turner’s sunsets) look flat and pale in comparison.  Finally, there is his passion for  detail, every small stroke so precisely laid. 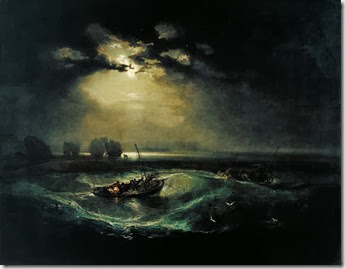 Consider Fishermen at Sea, a nighttime scene near the Isle of Wight and Turner’s first exhibited painting at the Royal Academy.  The painting is sharp at the illuminated center, indistinct in the darker surround. 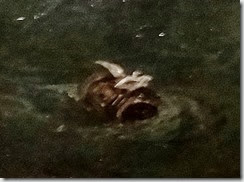 But the detail in the waves is not simply dry-brush foam: every detail was meticulously added.  Even the gull on the floating barrel, a speck at the lower right of the large canvas, was lovingly painted with careful detail (my photo). 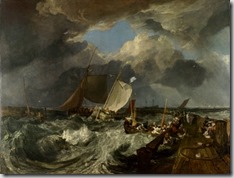 His depiction of  Calais Pier was striking for the turbulence of the scene: I ferry into Calais regularly and have never seen such seas.  In it, wind blows from the left, echoed in most of the exhibited paintings.  I don’t know why that would be preferred.

The same qualities carry over to watercolours: compare Cotman’s Dismasted Brig to Turner’s Mouth of the River Humber:

They are so similar, but Turner’s is so much more evocative.  This intensifies in his later works, mostlyi impressions filled with color and motion as he tried to capture water and spray, as in Snow-storm and Waves breaking… ‘amazing to see up close.

I’ll likely go back again for more study, but this is a wonderful show.  If nothing else, look at the show catalog for a glimpse of true genius.