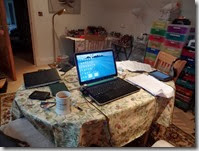 The week filled up quickly, travels to London and Cambridge, working hard on the business, dodging the lakes and valleys where roads used to be.  A lot of good progress but a lot of work to get there: some pivotal activities are starting and my life will once again fork, right or left, in the coming weeks.

Its also time to shift my UK base, moving residence.  I’ve considered returning to Cambridge, would prefer to stay along the Dorset coast, pragmatically need to be close to the business production or clinicals.  Proximity to the train lines and sea are important, it would be nice to be within a few miles of the Leisure Center, food shopping, and café’s.  Flexibility is important for the next few months, I don’t want to sign a long-term lease or buy furnishings.

I was talking about the prospect and the alternatives with friends, getting my mind around what psychic space I was looking for beyond the physical one.  And that relates back to concepts of expat success and failure (perhaps equally to entrepreneurial traits as well, although I haven’t thought that through yet).

I became an expat seeking new opportunities, shared experiences and a better life.  As much as I dislike moving, it’s an evolutionary step along that same road towards something better. I won’t step down with a promise to climb back up later.  So, its important that the destination be a bit aspirational (while still in reach) to advance my happiness and self-respect.

At the same time, expat failure happens when people don’t recognize the importance keeping some familiar things important to them, not allowing them to be given up in moving.  They are often small things, overlooked: Adapting to the speed of grocery checkout or socializing in line waiting, not talking with friends on skype or being visited by family as often as expected, difficulties being understood in a new language or having a social invitation rejected in a new culture.  So, it’s important that I know how to hold onto foundational things important to my everyday life.

Fortunately, the weather has emptied the market of movers, so there are lots of properties available at reasonable rates.  I’ll take the weekend in London / Cambridge to consider all of the possibilities, but I’d like to be moved by month’s end.