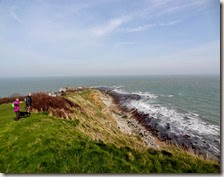 We took the Chain Ferry over to the Isle of Purbeck today, the southern side of Poole Harbour and gateway to Dorset’s Jurassic Coast.  It was a gorgeous day, sun sparkling off the water and warmer, but still well ahead of the summer crowds.

At the southwest tip of the island lies the small town of Swanage, a seaside community with impressive bluffs, a deep blue harbour, abundant sailing, and a zig-zag pier.  The area is best known for it’s quarrying of decorative Purbeck marble, then became a tourist destination in the 1800’s with the arrival of the first luxury hotel, the Royal Victoria.  Today the village plays off of Thomas the Tank Engine themes and various summer music events. 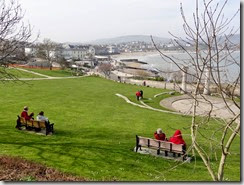 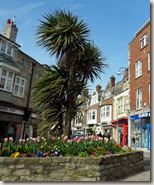 The beaches and cliffs define the area, along with locals like artist and vagabond Augustus John and colourist Alfred Palmer.  Today the streets seemed filled with matriarchal ‘earth mothers’, purposeful in checked shirts or smocks with long flowing grey hair.

The local sailing club was having a regatta in stiff breeze, and the angle of the wind made it tough to get past the derelict pier and out to open water.  One pair lost control and wrapped their sails around the pilings, totally stuck by wind and waves until a rescue boat could pull them off of the posts.  They attracted a seasoned crowd along the pier, full of suggestions. 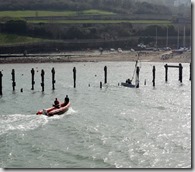 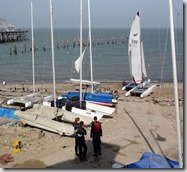 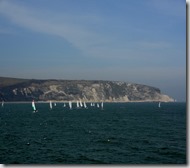 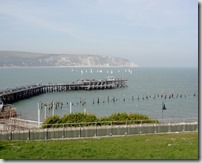 The beaches north of  town offered some good wading and rock-hunting; the pier south of town fronts hills that rise to sheer south-facing cliffs and spectacular sea views. 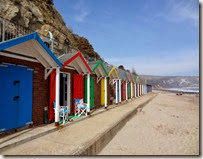 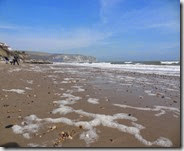 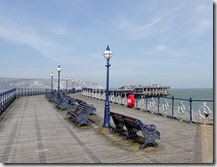 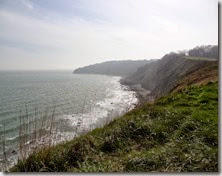 It really made for a nice day’s outing, lots of different things to see and do, with further explorations along the Southwest Coast Path once the weather improves a bit more (and exploring the offerings of the Piddle Brewery until then).