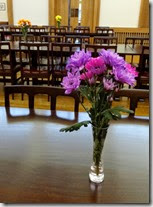 The college gardens were lush and green this week, colors glowing in the misty rain of East Anglia.  The groundkeepers brought in some blooms for the dining hall, and I took a morning tour to see how the wisteria were coming along.  The blooms are opening later this year, contrary to predictions that the buds had all opened and died prematurely in the February frosts. 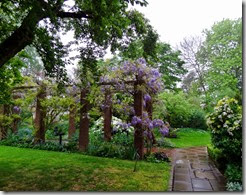 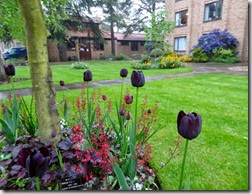 We closed out the company’s year, signing the reports, filing our plans, and certifying that we will remain a Going Concern.  The third-round fundraising opened as well: we’re gathering £600k to take our product to clinical trial and CE Marking.  It’s a real milestone for everyone, university, employees, contractors and investors who worked hard to bring this to fruition.

I passed by the old apartment on the way south.  It had been many months since I drove out there, and the renovations look like they’ve gotten underway.  A lot of material is coming out, ‘hard to tell what’s going up without walking around.

‘A quick couple of readings to share for the day, since they relate to recent writings.

Walking gives a boost to creativity.  Exercise has long been shown to stimulate health and thinking, but research shows that short walks (8 minutes) benefit creativity.  I have long believed that ‘cleaning the cobwebs’ with a run to the store or an hour on the bike is beneficial mid-day.  Just the change of scenery, away from the desk and computer, helps me see things more clearly when I return.

Middle eastern cuisine is becoming chic.  I’ve been visiting more Lebanese and Moroccan restaurants since the start of the year, bought Roden’s classical cookbook (not the faddish Jerusalem), and plunged into some some kitchen explorations.  It demands a whole new set of spices and a very different palate, but the results feel unique and exotic.

I scored pretty well at Things that Confident People Do.  Out of 15 questions, I only missed They don’t require permission to act (My board, my bank, and my confidante offer checks), They don’t judge people (some acts and beliefs need to be called out), and They don’t need constant reassurance (an occasional head pat would be welcome).  On the ‘plus’ side, I’m likely superlative at not living too comfortably, embracing scary things, and never giving up.  Still, Confidence is a social style, not an individual one: the article’s inventory misses the point that others have to believe it. 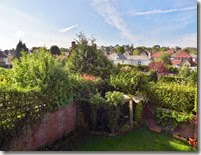 I stopped at the garden centre on the way past Royston to get some additions to my herb planters.  I lost about half the container plants over the winter and it’s time to get the windowboxes set up again.  I’ve added a couple of exotics for scent and color, we’ll see how they blend together (and into foods).

The Provence memoir notes how much our sourcing of food has changed in a generation.  Most notably, we’ve moved from packaged ingredients to fresh, using fewer packaged, dried, and frozen ingredients.

‘Growing up, we always used to have a bag of frozen vegetables in the freezer, tossing a handful in boiling water for dinner.  Now, I can’t remember the last time I’ve used anything but fresh (except canned tomatoes for marinara).

My soups are starting to move the same direction; I’ve fearlessly chopped, boiled, and pureed whatever is in season from leeks to squash.  I cook with smaller portions of meats, prepared in more varied and ethnic dishes, then compared in restaurants who know the cuisine.  And, while I don’t claim to have acquired taste, I’m starting to develop some good technique.

In short, plant a seed and you put something creative into motion.