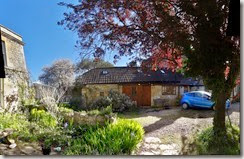 The crowds were already gathering, people pouring down the stairs into the Bond Street Tube Station by 3 pm.  Most have a four-day weekend and were trying to get a jump on others similarly leaving London (the Evening Standard predicted that over half the people living in London would leave for the holiday break).

I was in for investor meetings and to take advice on our organization and funding – all of the pieces seem to be falling into place.  There’s a lot of writing still to be done, and I spent the train ride south scribbling Urgent notes into my diary and notebook, prioritizing.

Still, it’s a holiday weekend, and the British are onto something when they make firm plans for a break, an outing, and some rambles in the countryside this time of year.   I haven’t been to the rolling hills and orchards of Somerset, southwest of Bath, and friends suggested that it would make a perfect weekend this time of year.  Cottages were still available for hire,

despite the number of people traveling, and the weather forecast couldn’t be better.

And, on arrival, it looks wonderful.  ‘many pictures and stories to come…

email
« Cambridge and south
The next adventures begin »
Radar Weather