‘sorry, but you’re not eligible for the concession until you’re 61.  The curator smiles sweetly, handed me a guidebook, and noted that the Picasso stereographs were free anyway.  Touché.

As good as the exhibit was, though, it wasn’t close to being the highlight of this weekend.  Neither was it the spectacular spring weather, the secluded cottage set in lush English gardens, nor even the lavish Moroccan dinner.

All wonderful in their own right,

But it wasn’t an adventure.

It wasn’t, for example, a balloon ride.

It was a perfect evening in Royal Victoria Park, light gusts of wind and a cloudless sky.  Three hot-air balloons were spread over the the clipped grass; the passengers were huddled around their respective pilots getting instructions.  Our guide from Bath Balloons described how we could fill the envelope, tumble into the basket, navigate over the farmlands, brace for landing.  I was only half tuned-in, pulling on heavy gloves to hold the airbag open as it filled.  It was all too cool for words (and who listens to warnings). 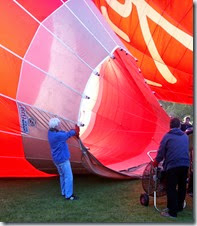 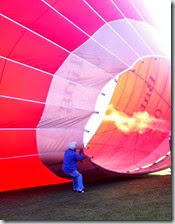 The envelope pulled hard as the fans drove the air in: the pilot warned that he was going to light the burners.  The flames and heat were intense from where I stood as the whole envelope filled and started to rise.  People were directed into the basket, I made a headfirst tumble, apologizing.  There was a sway, a whoosh of flame: we were off. 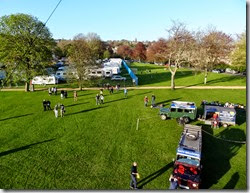 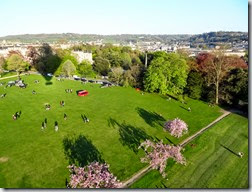 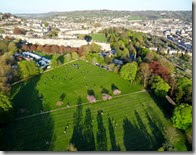 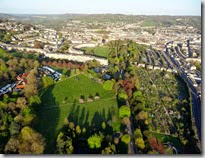 At first it’s like being in a glass elevator: the ground simply, silently drops away.  At about 500 feet, it gets vertiginous.  I’m very aware that I’m standing in a thin basket with nothing but air beneath me, and hook one arm around the padded brace.

The city of Bath opened out beneath us. 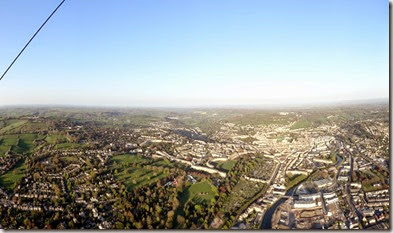 We ascend to 1500 feet, trailing the other two balloons.  There is no wind or sway (I suppose we are moving with the air currents).  After a few minutes confidence returns and I release the support and start to take in the views across yellow rapeseed fields and red-tiled villages.

It is absolutely amazing. 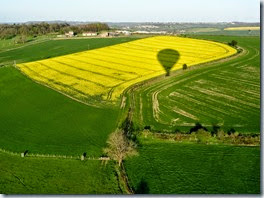 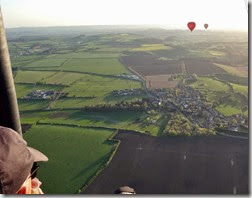 I can only liken it to taking a bicycle into the countryside.  it’s not just the silence and freedom of standing in open air, a thousand feet up, but also the connection to the sounds and smells drifting up from below.  The balloon drifts across the countryside at a good clip, moving up and down as the pilot adjusts the vents and burners, consulting maps and advising air traffic control.  The scenery is stunning, light and shadow, color and contrast.  Nobody says much, but just leans over the basket taking it all in. 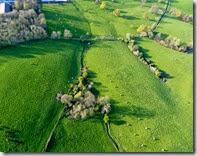 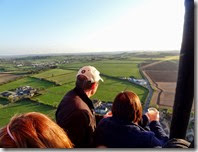 We all share a bottle of champagne, pose for a group photo, wave at cars and backyard sunbathers (Too low, shouts one man, caught in his underwear).  The other two balloons drop into a field near Pensford, but we’ve moved a bit south and drop low over homes in Bishop Sutton.  I start to appreciate the difficulty of getting a balloon down: a promising field is ruled out when two horses appear, another is refused because of fresh-planted crops. 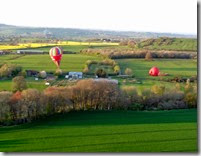 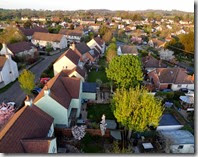 We cross Chew Valley Lake, the shoreline absolutely lovely in the sunset.  The chase vehicles have to go around the long way; we find one field after another dotted with trees and hedges, while Blagdon Lake looms ahead in the dusk.  The pilot brushes a tree, then another, advises everyone to brace for a sudden landing.  A drop, a bump, a thump, and we’re down on the shore, two glorious of flying  hours from Bath. 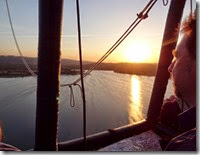 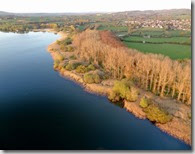 Papa Bush celebrated 80 with a skydive.  Me, I celebrated 60 with a balloon ride.  ‘Really an amazing experience: many thanks, Chris, for arranging it.

And yes, an ex-flautist can still do his candles.