In the 1964, Joe Orton debuted the play Entertaining Mr Sloane, a mix of social satire, moral lapses, and sexual ambiguity.  The play, more character study than narrative, centers around a pathological murderer rooming with a trio of scheming family landlords.  At the time, the open references to sex, pregnancy, and homosexuality bordered on scandalous (the London Evening News called it "a real shocker");  It was five years before the BBB dared adapt it for television. 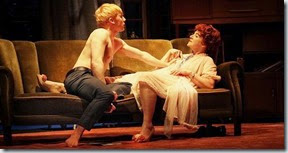 No less controversial was Joe Orton himself.  Mr Sloane was his first play, followed by Loot and What the Butler Saw.  He gained a reputation as a master of outrageous black comedies, of dark and facical cynicism.  Three years into his recognition as a successful playwright, however, he was murdered by his gay lover, Kenneth Halliwell; bludgeoned to death, his head ‘cratered like a burnt candle’.

Poole’s Lighthouse Theater hosted a revival of Entertaining Mr Sloane this week, staged by the London Classic Theater company.  I had some hesitation about the themes, but looked forward to a good evening of challenging theater.

Unfortunately, the production didn’t do justice to the book.

The enigmatic Mr. Sloane was short, blonde, unimpressive; scarcely convincing as a murderer.  Kath overacted;  Ed rocked on his heels.

Even the sex scene at the end of the first act felt perfunctory, unconvincing that the two would couple.

My overall impression was that the whole production, once intended to shock, has outlived its time.

Maybe its inevitable, but the play seems more like an artifact than a commentary.  But even as a glimpse of historical prejudice, it feels baffling.  The dialog wanders around situations without moving forward, the motivations are unclear.  Only the troika of blackmail threats towards the end takes on credible life.

The production was worth seeing, thinking about, and discussing over wine afterwards.  It leads to lots of interesting questions about the 60’s, about Joe Orton’s life, and about the nature of black comedy.

But, as a shocking evening? It scarcely raised a hair.