One of my earliest experiences in art class was learning how to draw objects in perspective.  We were given a block of wood, told to hold it at arm’s length at a bit of an angle, and then draw the outline as we saw it.  It’s deceptive; my hand stubbornly refused to create lines that matched the inclinations that my eye saw. It took many weeks of pulling the block out of my pocket and attempting to draw it before I could master the trick.

Later, we did still life drawing.  I marched my thumb around the pedestals and vases, noting the heights of objects and the distances between them before rendering them on paper. As I worked my way around the composition,

I’d too often find that my careful constructions didn’t match up the start and end where they were supposed to come back together.  It took a lot of studies and erasure to master that trick.

Perspective all come get that consistently rights down to how you relate expressive artistic representation to the eye’s reality.

A Study in Perspective is part of the new Ai Weiwei exhibit opening at the Lisson Gallery near Edgeware Road.  The gallery is free and photography is allowed: the exhibition of Weiwei’s work is modest (as is a stone installation by 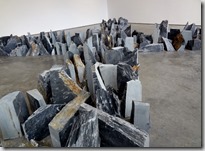 sculptor Richard Long (right) in another part of the Gallery) but delightful.  I’d mainly known of him through news reports of his dissident run-ins with Chinese authorities.  His work, though, reveals a fun and provocative wit behind the works.

Bicycles mound in stacks like a garden trellis, simulate huge snowflake symmetries across a wall.  A hanger or handcuffs from his prison cell are replicated in media from acrylic to wood.  A short film focuses on the laborious process of unscrewing a restraining bolt holding a sliding train window using his keys. 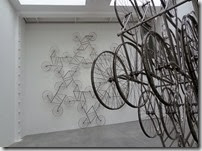 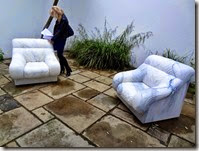 There’s always a creative whimsy in the work, a sense that these are slowly planned an executed with great care over long periods.  I feel like he takes a lot of satisfaction in the narrative of the work as well as the final completion.

And then there is the photo series Perspective. 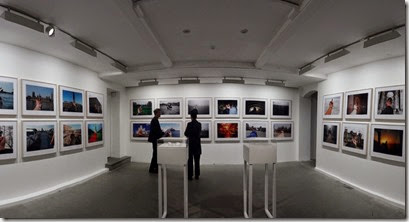 The photos themselves are interesting, amusing.  But the art, the delight, comes in the dawning realization of what he has created as you take in the volume of pictures that make up the set, the span of topics, the unifying attitude captured lovingly all over the planet. 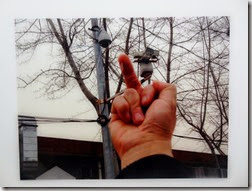 Half the fun is just watching people’s reactions as they take it in and realize what it is.  One picture might be intended simply to shock.  40 pictures is a statement.

More than that, it’s a perspective: representation giving meaning to what his eye sees.