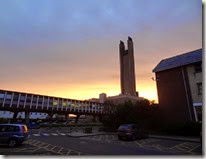 It was just one of those stupid things, dragging too many suitcases and bags across the courtyard at Wolfson College after too many miles of driving.   I stubbed a toe on a flagstone and went flat, possessions scattered, elbow skinned.  I picked up, dusted off, forgot about it, went on with business and life.

I think I must have hit a rock, though: a part of the elbow had a deeper puncture.   It healed, but yesterday suddenly puffed up like a plum and started to discolour.  My primary care physician is attached to my Dutch health insurance, and the surgery in Cambridge wasn’t taking walk-ins.  With a pitch in Leeds at 9 the next morning, the A&E was the only remaining option.

The Emergency Department is the Accident and Emergency (A&E) Department in the UK (spoedeisende hulp in Dutch).  Its not too different from the US version: a triage nurse, then a receptionist to check you in, then wait in a colored section based on the level of my emergency.  It’s a bit like jury duty: no phones or wifi, don’t make noise or wander off.  And the wait, about three hours, wasn’t much different than if I walked into a US hospital with a similar problem.

The NHS has been held up as a generally bad idea by both sides of US political opinion, example of everything from out-of-control costs to endless queues to delayed and limited access to care.  But my reality was much more benign.  The staff was nice, checked on me regularly, and progressed me through a reasonable sequence of assessments and procedures.  It was nothing like the rhetoric, echoing my experiences in the Netherlands and Switzerland as well, all at much less cost).

I had a superficial infection that needed some deeper cleaning and antibiotics: the therapy was less aggressive than might have been done in the US.  There were two follow-up appointments to arrange and I was on my way, even before my eReader battery ran down.

email
« To the IoM
A touch of perspective »
Radar Weather