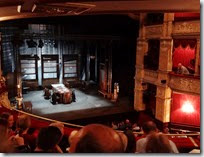 But in the small world of the courtroom drama, it can be.  Under cross-examination, deceptions are revealed; with the clack of a gavel, wrongs are avenged; in the jury room, moral fog clears to mortal certainty.  It’s a satisfying few hours, moreso when a few big names are tossed into the revival of a classic theater.

12 Angry Men is a bit of a 50’s anachronism, fighting battles against prejudice that citizens of the 21st century (think they) have left behind them.  The jurors are prepared to convict a black youth of murder simply for being black.  Only Juror 8, laconic Tom Conti, takes a stand against the conflicting evidence and the biases of the other 11 jurors, eventually persuading them all to join in voting ‘not guilty’.

It’s also a star vehicle.  In securing seats, the w.wezen knew of my fondness for Robert Vaughn (even though we both preferred David McCallum as Illya Kuryakin), here playing Juror #9.  Now 81, he has a small insightful role in the production, but is thoroughly enjoyable as a recognizable presence.

The production is, finally, good drama, with vivid characters locked in close, well articulated, verbal struggles.  Even in the 50’s, I doubt that people shouted at one another as these folks do (they certainly wouldn’t be effective in making their points this way today).  But the arguments and evolution of the play, marked by the slow rotation of the central table, are compelling and engaging.  Even the rants that seem over the top are effective as a period piece. 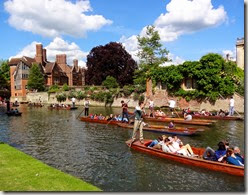 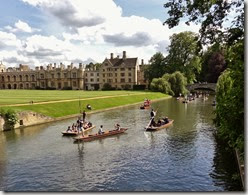 I like a bit of airing to balance the weekend; a train trip to Cambridge on a sunny Sunday scratched the itch.  Clare’s Fellows Garden was open and in full bloom, and the Cam was filled with punters.  A good walk, a little naming (in customary British Latin), and tea along the river completed a good weekend. 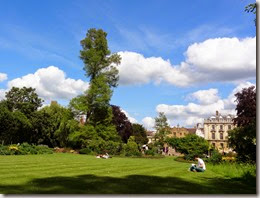 Monday is back to Poole, back into closing the partnerships and fundraising: the only jobs that matter in the coming weeks.