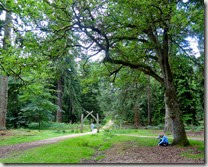 I tapped impatiently at the satnav screen, stuck in a massive queue south along the A31 towards Ringwood.  I’d seen the backup, Londoners headed to the beaches for the weekend, and knew it extended almost up to Southampton.  The TomTom suggested veering through the New Forest, first to Brockenhurst, then along the coast.

And so it was that we landed, unexpectedly, in the Redwood Groves at Blackwater, near the Rheingold Lodge.

It’s not the sort of place you can find on purpose, along a single-track road, no postal code, in an empty corner of the New Forest.  But it is a beautiful grove of magnificent trees, completely out of place in this part of the world.

in the manner of British naturalists.  There’s a little debris from winter storms, downed and tangled trunks, but otherwise it’s a quiet place of needles close underfoot and distant branches swaying overhead.

These trees are about 160 years old, very young compared to their New World parents.  But they have the same massive footprint, soft furry red bark, and soaring arrow-straight trunks, cloaked in absolute forest silence, that make the American groves so spiritual. 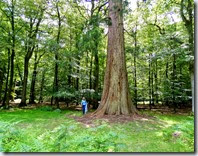 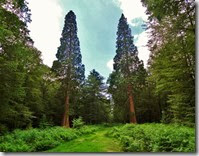 And there is a historical link between them.

The New Forest began as a Royal Hunting ground for William the Conqueror around 1067.  It sprouted numerous hunting lodges over succeeding centuries, and among the largest was the nearby Master Keeper’s Lodge.  This residence, occupied in 1628 by Woodward (H.M. Keeper of the Timbers), expanded under his direction to include

Even as the Forest became increasingly neglected under Charles II and others, the foresters (later reduced to Nursery Keepers) kept adding to the Lodge and its gardens.  In the mid-1800s, the resident Forest Nurseryman added an arboretum, filling it with azaleas, rhododendrons, and non-native Douglas Firs and Redwoods planted from cuttings and seedlings from the United States.

Today, this is preserved as the Tall Trees grove along the Ornamental Drive.

It turned out to be a lovely rest stop and picnic area, filtered sunlight highlighting the meadows and rivers beneath the trees.  With solstice arriving, it was nice to avoid the crowds for an afternoon and get a bit closer to nature for a ramble, especially one  unexpectedly familiar and out of place.