It’s been suggested that the abysmal signage on German trains was imposed by the Allies to disrupt recovery after WWII.  My instructions seemed simple enough: Take the S1 from the Airport to Laim, change to the S3, get off at Olching.

And so New Adventures Begin (a.k.a: Mr. Toad’s Wild Ride).

The S-Bahn (S1) has both Express and Local lines, both going to Munich from the Airport.  I picked up my associate, overnight flight from Chicago, and we headed into town for a bit of sightseeing.  ‘Day-pass from the machines, what could be easier?

However, the Express passes Laim, stopping only at the Hauptbahnhof (Central Station). No worries, simply ride on to Marienplatz for lunch.

But, no, this S1 variant reversed and headed back to the airport.  The meal was a bit delayed getting turned around…

Similarly for trying to get to Olching.  DB Rail recommended an S3 express, which was direct to Mammendorf, the site of the next day’s meetings.  However, today, this was an overshoot from Munich, requiring a half hour wait for the Local S3 to backtrack to our pit-stop village, tucked along the Muhlbach river.

My competence at mastering the European rail system has now called into serious question.

The morning’s embarrassment was salvaged by the afternoon’s visit to Mammendorf’s annual Volksfest, a celebration of all things Bavaira (since 2007).  Beers flowed (by the liter) and sausages (by the meter).  Everyone (save us) was dressed in traditional Lederhose and feathered caps; the orchestra played Bavarian standards.

I tried the local delicacy of sausage slices, cold, with vinegar, oil, and onion (the Dutch-German version, swapping beef for haring), and ate far too many pretzels

By late afternoon, the band swung from Bavarian folk tunes to Super Sjoene Daag (The Carnival Song: I got heavily nostalgic and did the dance) and a mix of Elvis standards.  The second liter of beer arrived as the crowd thinned.  We made faces at everyone’s babies, trying tog et a smile.  A few couples danced; I played with portrait photography. 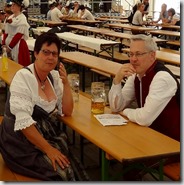 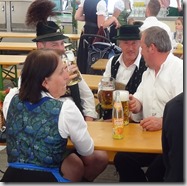 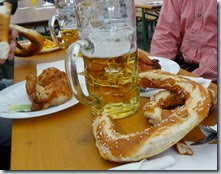 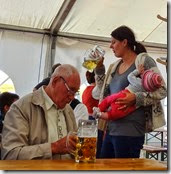 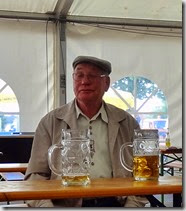 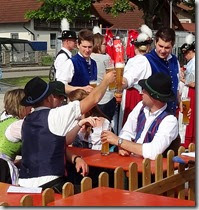 We talked about what this all meant to the locals.  Everyone know one another, most had been present at the creation of the tradition.  The ambition in Mammendorf was to celebrate tradition with neighbors and friends, to drink fine beer 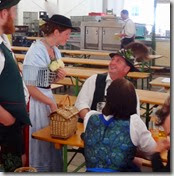 and eat juicy sausages in the warm summer sun, and to gather the extended family within the company for the future together.

It’s a different ambition, but not  a bad one.