Sunny, humid highs have graced the Jurassic Coast this week, punctuated by anemic thunderstorms.   I’ve been loyal to the Lilac Room, calls and emails to keep our legal agreements, production facilities, fundraising and clinical trials rolling.  Midmorning coffee with friends, late afternoon walks along Sandbanks, keep it all (somewhat) balanced.

It’s ‘Life in the UK, my secondary project.

My Residence Permit expires in January, and I need to get serious about the Indefinite Leave or the Dual Passport options.  I’ve no interest in giving up my US Citizenship, which would be required by the Dutch, yet still want to be able to remain in Europe and have some flexibility in where I finally settle down. 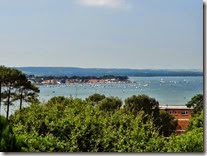 Anti-immigration sentiments are making it increasingly difficult to remain as a long-term expat, even when creating businesses and jobs, bringing unique skill and experiences, and that ‘special relationship’ between our nations.

Lisa Pollack wrote about the difficulties in a column in the FT last week.  I hadn’t realized it, but only 417 Americans qualified for a Tier 1 Visa the year that I got mine.  Since then, the qualifications and quotas have tightened considerably, and extensions will no longer be granted after next April.  Her experiences are exactly parallel to mine (we even both went through renewals at the Croyden offices); we only differ in that I have relied on skilled help to navigate the unforgiving assembly and prosecution of an application.

So I called my advisors and said that it was time to get the ball rolling.  “Save your bank statements, pass your test, and call me in September,” he counseled before leaving on an enviable holiday.  I picked up my copy of Life in the UK and started studying.

For the most part, the social and political section seem straightforward.  Although things are differently named, there is sufficient overlap between US and UK systems of governance that it all seems familiar in principle.  The differences are mainly in vocabulary, always a problem, and exceptions for Wales, Northern Ireland, and Scotland.  The main issue has been in memorizing 2000 years of detailed history, heavy on names and dates.  The timelines and details in Project Britain have been invaluable in summarizing the information.

My test, then, is scheduled for the 31st: I’ve paid my fee and I spend an hour each day on the exercise bike, studying, before  heading to Penn Central for a beer and a test.  I’ve never enjoyed oral testing, and this is a daily Quiz Night, but my practice scores have risen from the 40s to the 90s, far above the

The only negative is that I’ve become a fixture on the terrace, slurping a Doombar as I mumble answers into my earpiece.  Several people greet me as I enter now, asking how its going, one woman tried to buy me a beer last night.

Distracted and out of practice, I failed the pick-up test miserably.  I managed to be both surprised and confused by her interest, alongside the w.wezen’s laughing critiques and queries through the earbud.

Fortunately, that wasn’t the real test.

So, as with so many things in my life:  ‘still practicing….

email
« Following up, MH17
Winding down the week »
Radar Weather