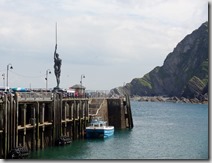 I was taking pictures of  the boats, low tide, in Ilfracombe’s harbour when the thin spike of an immense figure caught my attention.  Poised at the harbour entry, it was vaguely human, oddly curved, a sword, a buttock proportioned to reflect the sun.  ‘Just weird.

Ilfracombe is a small coastal town just west of Exmoor Park, a mix of working fishing piers and tourist marinas.  The streets are lined with sweet and gift shops, alternating with fish restaurants and boating supply businesses.  Small swirls of

elementary school students gusted past in uniform dress and unruly excitement at having an outing along the harbor.  Visitors sat on terraces nibbling crab sandwiches and sipping cider; a few skippers worked their boat bottoms, boots deep in the red mud.

There’s no signage to tell me what it is, what it means, how it came to be here, facing along the coast to greet returning sailors.  ‘just a lot of people staring u at it and taking pictures. 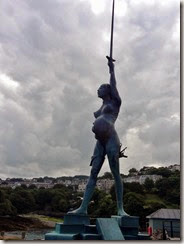 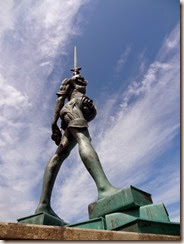 From one side, it’s a very pregnant woman standing astride piles of books, sword in the air, scales tucked behind her: a figure of war and justice?

From the other, the figure is open and deconstructed, the skull, the breast, the baby, skin peeled back to reveal the muscles: life and death?

A sign in the window of the aquarium finally cleared it all up.  The city fathers had contracted with Damien Hirst, a sometime resident of the town, to create a focal point and tourist draw.  He donated Verity, after a Degas dancer.   Considerable thought went into protecting the sword from lightning, the body from wind and high waves: it will stand for 20 years.

The statue is predictably controversial: locals feature Hirst art-cards in their window or ignore it completely.

The Guardian had a lovely scathing review (gigantic and arrestingly hideous).

I am no fan of Hirst: I’ve seen his Shark and his Diamond Skull and have always thought he is overrated and uninspired, the

Oh, and here’s  the boats and harbour pictures I was working on when Verity intruded…. 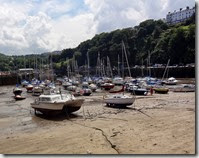 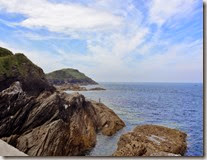 email
« Out by the Dovecote
Milestone 1500 »
Radar Weather