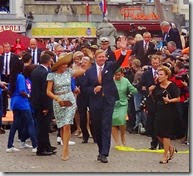 The Dutch Anniversary event was a good one, all sunny skies and broad smiles filling the Markt Square.  The Royal Bus delivered the entourage at midafternoon beneath the gantry’d gaze of Dutch televising, relayed to a jumbo screen along the perimeter of the Square.  For most of the ceremony, it seemed that the crowd had it’s back to the event, preferring the grainy images on the Big Screen. 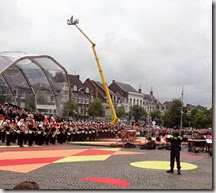 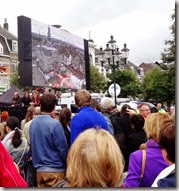 There was a brief signing ceremony in the City Hall, then everyone took their seats for the fashion show and musical performances.  It was hard to see much: the Royals were seated well down in the Orange Box Seats.  Maxima was easiest to spot beneath her enormous hat, King Willem-Alexander, similarly, beneath his big-handed wave to the crowd.

A presentation coach once advised me to watch how professional politicians give a speech, the way they use their hands and gaze, how they switch from factual to personal modes of connecting.

There is similarly an art to working a receiving line and a crowd: Does each person’s anticipation yield to satisfaction, had how is the trick turned?  It’s a study of how the King pauses, smiles, makes a remark, shakes hands, moves on.

Of course, as king, he is shielded by protocol and security.  There will be few hostile encounters, nobody in line who wouldn’t be elevated by their moment alongside royalty.  Unlike a politician facing a mixed crowd, the King is assured of friendly passage, he likely becomes more panda than panther within that bubble.

The pageant continued, twirling gowns and singing schoolchildren behind layered rows of security watching the crowd’s every movement. 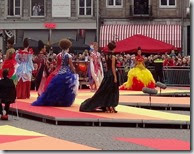 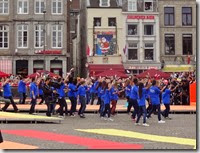 A few signs advocated abolishment of the monarchy, and a burst of red, white, and blue streamers tangled on the speaker system, but otherwise the event was postcard perfect. 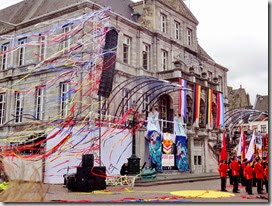 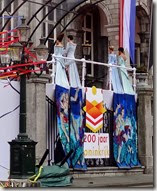 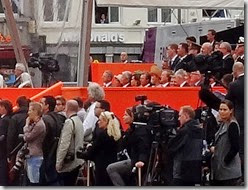 I have to admit that I was wrong about the military vehicles arrayed along Kesselskade.  They were part of an armed forces exhibition put on in conjunction with event, evident when children started crawling over the troop carriers and a specialist showed off the gyrations of the bomb-disposal robot. 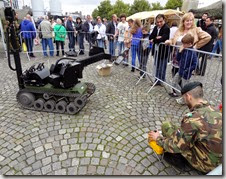 After festivities, the Royals briefly visited Preuvenemint the annual food festival in Vrijthof Square.  A few booths closest to the Theater were cordoned off so that the entourage could sample a couple of items.  But most of the event was undisturbed, a festive mix of music, fashion, nibbles and drinks. 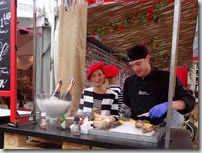 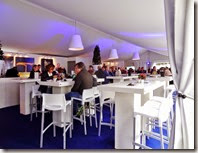 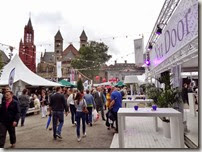 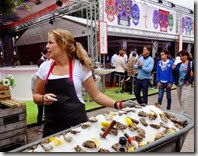 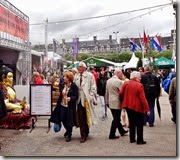 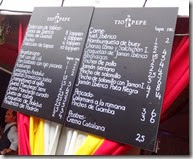 I didn’t try much food this year, instead favoring a couple of café’s closer to my apartment. 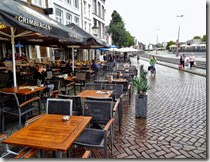 But I still like taking advantage of late summer evenings to get out and mingle, to see how much Dutch conversation I can understand while eavesdropping, and to look for a good bottle of wine to share with friends at their ‘mix ‘n mingle’ dinner. 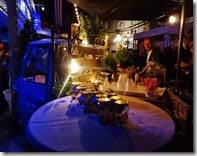 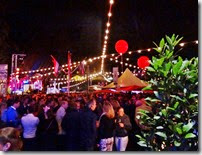 The Netherlands celebrates its 200 year anniversary in Maastricht today.  It feels a bit strange to say that: so many of the stories of the Golden Age (and a lot of the city-core buildings) are much older.  But the Kingdom as it currently exists started with independence from the French at the Prince of Orange’s return in November 1813 and his investiture in September 1815.

We’re in the middle of a 2-year celebration of that founding, and the Royals are visiting Maastricht for a day of celebration. The Dutch King and Queen are being joined by Belgian and Luxemburg royals (the Kingdom was all one country uniting the Netherlands and Belgium 200 years ago) and the Federal President of Germany. 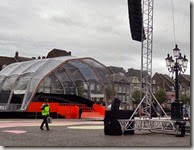 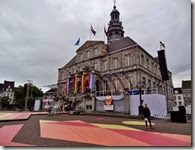 Plans begin this afternoon with a musical fashion show, “Everything Flows”, in the Markt Square in front of City Hall.  A lecture on Dutch foreign policy follows (lending some balance?), leading to a lavish dinner and musical theater on the Vrijthof this evening.

‘No sign of favorite son Andre Rieu on the agenda.  But Pruvenemint, the annual food fair, is also filling the Vrijthof this weekend (and the royals are dropping in for a full ten minutes to sample the food), so it will be a busy evening in the city center.

The military has set up a staging area outside my apartment along Kesselskade, communications trucks and tents, armored vehicles alongside police and emergency responders. 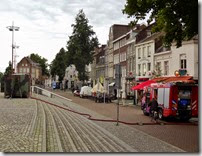 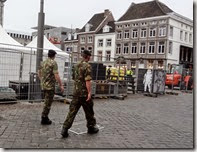 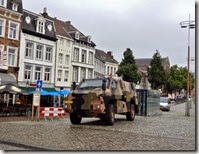 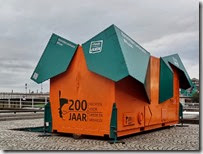 They all compete for space and attention with the cafes, spilling tables out across the street and along the river, drawing crowds that security folks would hold at arms length.  A warm rain drizzles over the entire assemblage, huddled beneath tarps and umbrellas and eying one another across the glistening street. 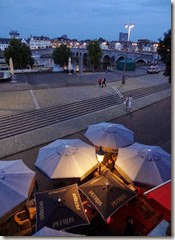 I was up early to wander the venues, looking for a pastry and a coffee and a good seat.

It’s been an uncharacteristic month away from these pages, I know.  But I needed a vacation to focus on various bits of life that needed attention and to recharge my thoughts.

Thanks to those of you checking in to see what was up.  Business and life are going well: no major issues to report.  I’m looking forward to sharing stories, photos, ideas (and the occasional biertje) with you all once again.

Entrepreneurship has many dreams.  I want to improve patient outcomes, lower hospital costs, return a big profit to my investors, work with good people, build a lasting legacy.  And, perhaps, achieve one of those Big Exits that pave the Golden Road.

The FT offered several Emerald Cities,  five waterfront homes in reach of a modest win.  I’ve been to Henley-on-Thames, and the boats moored by the house had appeal, but the villa on Lake Como was the one that caught my eye.

Not too big, a lovely veranda overlooking the lakes and mountains; lots of wood interior and a lovely breakfast gazebo for plants and painting.  It evoked a lot of good feelings.

At the moment, though, I have to deal with a different sort of water.

Heavy rains fell on Maastricht earlier in the summer: gutters in our roof overflowed and water drained down the inside

front of the building.  I wasn’t home at the time; the students downstairs had moved out.  When the basement of the restaurant at street level started to fill, they called the landlord. The drainage was quickly fixed, but the interior damage remained.

I arrived back in Eindhoven, passed the souvenir stands (below)

and took the train south to start the fixes.  Its still disheartening: paint discolored, plaster peeling.  The walls have to be opened so that the structure can dry.  The workmen arrived this morning, armed with axes, and set to work.

The plaster flew, the wall opened. 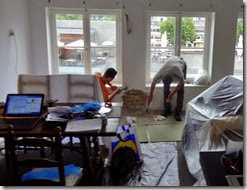 I’m the sort who tends to see these things symbolically: the destruction of my home echoing problems in life.  But the workmen made a good effort to clean up, leaving only a few tools and a patina of dust over everything.

In the end, the bare brick was actually sort of warm, giving a bistro-ambience to the front room beneath the incandescent bulbs.

But the moisture was pretty severe.

The bricks were soaked, and I could push a finger into the big structural timbers across the front wall.

My guess is that this will turn into a much bigger job than anticipated, likely not finished before winter.  Everyone says that things will be made right, and I’m trying to get assurances that my belongings will be safe while the

parade of carpenters and plasterers comes through.

in any case, it’s not forever.  A year to market; a year closer to Lake Como…