Herfst groenten are filling the grocers and farmer’s markets this month, root vegetables and squashes.  I’ve been trying to learn more about the various choices and flavors on offer, mostly using them as starters and side dishes.  I’ve played with making leek and potato soup (and its cold cousin, Vichyssoise) in the past,

but wanted to try something lighter (gram for gram, squash has half the carbs and calories of potatoes).

So, I brought home a bag of vegetables for two soups that caught my fancy, a leek-and-carrot blend, and a leek and butternut squash mix. 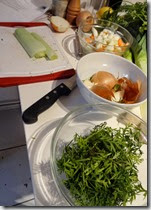 I’ve gotten better at peeling, slicing, and chopping after watching some skills videos and practicing on onions and tomatoes.  Despite my fear of blades and nicking myself, its become a relaxing rhythm.  And there is something really satisfying about settling in with a knife and a pile of vegetables, ending up with a bowl of trimmed waste and another of  prepared ingredients.  And the container gardens are still yielding thyme and rosemary, chive and dill, even though the days are shorter and cooler.

The first job was to prepare a big pot of vegetable stock.  I base my stock on the BBC recipe, minus tomatoes and salt, adding herbs and greens.   It only takes about an hour to reduce it, then the broth strains out and I nibble at the left-overs while I make the soups. 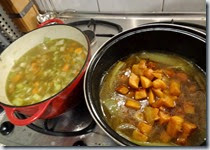 The Carrot and Leek is probably simplest, just mix the ingredients, simmer a while, and puree with the hand blender (pot on left).  It thickened nicely, but the taste just wasn’t where I wanted it: too thin and a bit acrid.  People with a proficient palate can know what to add by taste, just as an painter knows how much of which colour to blend to match the object in front of them.

I’m not (yet) one of those.  So I ladle bits of soup out into soufflé cups and experiment with basic flavors: milk/butter, citrus/vinegar, tomato, salt/herb.  Each perked up the soup, but each in different ways and it was easy to overpower the leek and carrot flavors.

In the end, a bit of cream / butter base added some richness, salt and pepper: it’s not something I would serve to guests, but it’s pretty healthy and very light.

The Squash and Leek came out much better.  Cubing the squash, baking half an hour with butter and cinnamon, makes the veg nicely soft and sweet.  It thickens nicely in the leek and vegetable broth, and the whole conglomerate whips up nicely under the blender.  I needed to thin the soup a bit, but since it was already sweet I added more vegetable broth instead of a dairy product.

The two complimented one another well enough that thinning the squash soup with the carrot soup resulted in a nice balance: I wouldn’t recommend making both, but they did fit together nicely.

And it’s good to have bowls laid in as the cold arrives outside: I ended up with a bit of a raspy throat from travels and this gives me a couple of days of comfort food to soothe it with.