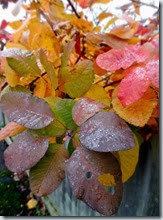 It feels like 2014 is drawing closed faster than I would have thought, faster than I might have wished.  The trees are almost bare, brilliant orange and red bushes hugging the ground and fences are the last remnant of autumn.  There’s a bite in the damp air most mornings, commuters huddled into their overcoats, clutching coffee on Platform 3 to London.  My parents report the first big snows of the season in Colorado.

One pair of housemates has found a home nearby, and is celebrating by painting their plates and cups.  I declined to make a commemorative cup, the girls were doing a wonderful job and I stirred up some Taco Night fare instead.  The avocados have been ripening on the windowsill between my potted plants for a week, and there is enough coriander (cilantro) and ripening chili pods to garnish from the herb planters without a trip to Tesco.  With Masterchef Pro in full swing, I opt for John Torode’s recipe, with a couple of supplemental herbs.

Today was a London day, meetings with a UK grant agency, the Scottish development agency, and a potential investor.  Between strong coffee and weak tea, I scribble off more emails and make hopeful phone calls.   I drop off my watch and my Nexus for repairs, nibble at the food booths and listen to the music. 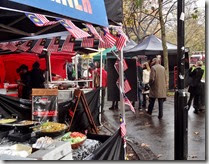 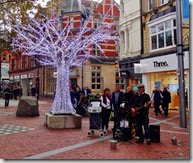 I’m also meeting with my immigration advisor after recent changes were announced:

The Tier 1 (General) visa category will be eliminated in April 2015.  This visa category was offered to highly skilled foreign nationals as an option to move to the United Kingdom and work for any employer.  The government stopped accepting new applicants in 2011 but continued to allow existing visa holders to apply for renewals.  Starting April 2015, the category will cease to exist.  Foreign nationals currently holding this status and employers of foreign nationals working using their Tier 1 (General) status will need to consider alternative options to maintain work authorization in the United Kingdom after this date.

I think that I have a good (although expensive) path open to  converting, but it’s still a paperwork game, making sure that the story is airtight and perfectly documented.

Meanwhile, Christmas preparations are blanketing the UK.  The faux-Market is rising along Southbank, the Winter Wonderland being assembled in Hyde Park.  Lights are appearing over major streets and fairy sparks are filling the trees.  The stores have converted to holiday-themed sweaters and socks; I’ve bought my first Christmas cake at Waitrose.

I’ll feel better as we close the funding rounds, money secure to complete our clinical trials and enter market in 2015.  After a lot of hard work and creative adaptation, we are very close.  All it takes is that last push to success.