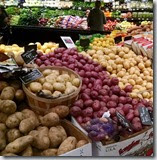 For me as an American, few experiences highlight the differences of being expatriate in the UK like shopping for potatoes.   Growing up, we were taught that brown potatoes were for baking, red for boiling.  In my own home, we gained sophistication: brown potatoes Russets, grown in Washington or Idaho, and baby golden spuds could also be boiled.

This taxonomy serves well in the Netherlands as well as the US, but not in the local Tesco.  Starch content is defining, not colour:  King Edward and Maris Piper for roasting, Charlotte for boiling, Desiree for mashing.  The British pair potatoes with food with the careful eye that we reserve for wines.

With a little study, I adapt (I’ve cooked a selection to learn the differences).  But dual ways of thinking about single things (or ideas) pop up all the time, sometimes in cultural contexts like potatoes, other times in business or relationships.  For me, they lead to philosophic reflections worthy of a Shrink and Sage during drives along the motorways.

Persuasion  / Seduction:   I was always taught to take an objective, dispassionate approach to business situations.  I operate from a base of  fact, evidence, analogy, and narrative to persuade; have believed in Bob  Sutton’s advice that Strong Opinions, Weakly Held, win the point.  But, after reading the Steve Jobs biography, I wonder whether business success truly can be achieved with dispassion?

Inspirational leadership is as passionate as it is insightful.  to what extent to great leaders seduce rather than persuade?  After glancing through a summary of Robert Greene’s guide to the art, I hope it isn’t (and the NYTimes warns of trying to imitate Jobs)

Hope / Faith:  I’m generally an optimist about the future, an idealist about people. But that has never translated into saying that I have hope about either.  Hope is pernicious when it becomes the last positive approach  to a situation where all prior efforts have failed.  I prefer to say that I have faith that things will work out, even when I can’t say how.  This is echoed by other writers.

Anger / Umbrage:  Life is filled with irritating incidents that annoy or irritate.  While I can feel a degree of anger when I get wet because I forgot an umbrella or I read an untrue critique of my product or project.   But if a colleague spreads an unjust comment about my performance or someone just behaves badly, is my feeling justified anger, or only umbrage at the lack of respect?  The soft skill to properly attribute anger is as important as distinguishing the type and response (and, for the latter, the Shrink and Sage reference Aristotle’s maxim to be angry with the right person, to the right degree, at the right time, for the right purpose, and in the right way, while Russell factor

analyzes his way to list nearly 200 varieties of the experience of anger).

Love / In-love:  I have always used the two terms  interchangeably, to tell a partner I love you, and to say I am in love when talking about them to others.  But it’s also true that there are people I love who I am not in love with (the opposite, unrequited love, is also possible).  To say I am in love with you sounds much better than simply I love you, but it’s not the everyday expression of affection.

To pursue your own duals, a good reference site is Difference Between, a fount / font of similar dorm-room debate fodder.