Expat weekends can be as mundane as domestic ones.  The house needs cleaning, the wash is waiting; shopping and tidying take their turns.  I’m taking my time enjoying an online photography course.  I try not to work beyond organizing notes for the coming week, instead catching up with the weekend papers and BBC television.

Which brings me to Simon and Nigel.

I once divided men into the sort that preferred Keira Knightly vs. the ones that dreamed of Kate Winslet.  The Movie Times gave the nod to Keira while acknowledging that Kate has more talent.  For me, it comes down to whether the choice is based on approachability or depth. 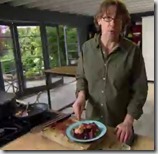 Nigel Slater is a self-styled Cook who Writes, delivering equal parts reflection and homily in his books and television shows.  He putters about his airy kitchen, laboratory clean, and his lush, well-boxed gardens with rumpled hair and earth-tone clothes, pursing his lips and glaring over his glasses.  He doesn’t smile much.

His recipes angle towards eccentric, everyday dishes that he characterizes as ‘quietly civilized’.  He mixes equal parts ricotta cheese and ground beef to make burgers, pan-fries salmon crusted with rice wine and sesame.

But he never seems like someone who would be pleasant to join in the kitchen or over a meal.  The focus on taste and freshness is both relentless and disapproving; his numerous opinions strongly stated and unforgiving.  He signs off his recipes with a flourish of self-satisfied finality.

Paradoxically, I do like his approach to dishes.  I’ve been cooking vegetable stews all week,

starting with a stock base, adding leafy veg that catches my eye at the green grocer, playing with fresh herbs and distant spices, then finishing with a handful of rice noodles.  They have gotten better and better, very much in keeping with his philosophy of creating understated, handcrafted home cooking.

Simon Calder, The Man Who Pays His Way, is a travel writer for the Independent and a presenter on the BBC.  He takes a common man’s approach to travel, bundled against the wind and sun, rambling the hills and stopping to sample food at seaside shacks.  Similarly brown-haired, disheveled, and earthen-clad, he feels much more like someone you would share a meal and swap stories with. He’s always gazing straight on through rain-splattered glasses, waving his hands.  Self-effacing Simon smiles a lot.

His travel advice is usually practical and inexpensive. used to swear by Frommers guides, but usually turn to the Sunday Times Travel and Simon for first

recommendations now.   I took his reassurances that it was a good time to visit Marrakech, and his small-scale recommendations for Dorset and the Lake District.

The test always come when a travel writer visits a place that I know intimately.  So I was delighted when Simon wrote about Maastricht a couple of months ago.  He got it pretty much right: things to see, places to eat, where to walk.  I would only differ in his nod to using the local airport, and his omission of TEFAF and

I follow Simon’s loose-limbed approach to travel.  I am certainly interested in where the key museums, gardens, and restaurants are.  But I also value the time to walk and look around and to meet people, letting the ambience of a new destination lead my path through it.

The weekend has room for both pundits.  But I turn to Nigel for inspiration, to Simon for motivation.

And I think I’d rather spend an evening with the latter.