The UK enjoyed a solar eclipse this morning,.  Totality was over the Faro Islands, far north, but Dorset got 85% coverage of the sun.  Maximum darkness was predicted for 9:30 in the morning,, so I was up early to get fresh bread and coffee from Parkstone so that I could settle in for the event comfortably.

It’s an astronomic day in other ways as well.  Equinox, where the sun lies directly above the equator for a few moments, was also today: the first day of spring.

‘hard to tell locally, though.  Temperatures are still barely above freezing and the only the hardiest trees are flowering.

’d hoped to see the crescent sun at mid-morning, but the day started grey and cloudy.  BBC astronomer-royale Brian Cox (actually a particle physicist) was holding forth from Jodrell Bank, near Manchester.  The skies were clear and sunny.  Schoolchildren, dressed in welding goggles and trying to image the sun through colanders made, for a good backdrop.  To the north, the Faro’s were cloaked in cloud, but there were various airborne cameras broadcasting from clear skies in airplanes overhead.  Apparently, for £5000, anyone could join. 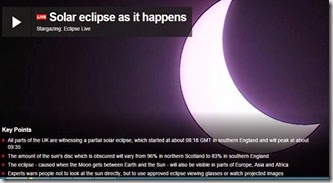 As half-nine approached, it did get noticeably darker: car headlights went on and the birds got quiet.

The commentators waxed about the 384,400km column of shadow moving across England.  Cox dithered about the diamond ring effect of the sun’s re-emergence.  Contact with the reporter in the airplane flickered.  Schoolkids spun wind gauges and twirled thermometers, participating in a survey off the effect of the eclipse on the weather.  Everyone forgot to check in with the dark, frigid pictures from the ground in the barren Faro Islands. 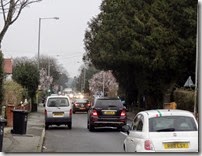 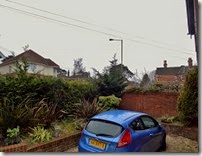 Then it was over and past, the streets brightening, the birds did their 5 am thing, the BBC returning to regular talk about politics.  But, since I used to teach astronomy at Columbia

Basin College, so I still get excited about events like this, and it was cool to follow the coverage and pictures for a few hours.  There is a big solar eclipse in the US in August 2017, ‘probably the next chance I’ll have to see one.