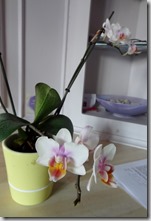 Winding down the week – few plans for the weekend ahead yet.  Forecast for rain and wind getting heavier through Sunday, so perfect sailing and walking climate.  The orchid has even sprouted a new set of flowers since taking it back from the window, while the chili is thriving on less water.

I suppose I could finish grading and start the VAT, if motivated, but am more likely to binge on Blacklist or House of Cards.

The new Nexus 9 tablet arrived this morning.  I’ve had a gap in my accessories since my ‘7 went toes-up a couple of weeks ago.  My 2-year business phone contract came up for renewal and O2 offered a free tablet for renewing my contract.  The device is lovely: thin, light, bright, and happily setting itself up in the corner all afternoon.  It feels awkward in my hand, the extra two inches makes a difference, but I think I’ll like the bigger screen.

And, new roommates arrived at 5-Woodside this evening, a Greek couple with little English language fluency.  They seem nice and their cooking smells wonderful: I can see a multicultural food night is in the near future.

The Dutch company e-njoint is offering an electric joint, basically a cannibus –infused e-cigarette in the vaporizer version (it only smells like pot otherwise).  Inevitable inventiveness, I suppose, complete with the strap line  Taking vaping to the highest level.  KanaVape is a similar version coming to the UK.

I managed to lock myself out of my room yesterday, only the second time ever.  I need to copy the key, it’s too easy for a door to blow shut.  I always leave the window unlocked, though, and my neighbor, former editor of a Dorset yachting magazine, had a ladder available. We were up and in and nobody notified 112 that two guys in ties were breaking in.

Billy Beane, the  Oakland A’s manager who inspired Moneyball, is coming to the Netherlands.  He’ll be the technical advisor for the AZ Alkmaar football team.  he’s been analyzing Premier League teams in the UK informally and this will be his first try at seeing whether number crunching can be as transformative in soccer as it was in baseball.

I’ve been following a number of ‘photo of the day’ sites, pretty much a constellation of Faces or Humans of  ‘London’, ‘Amsterdam’, or ‘New York’.  Always interesting, it reminds me of how unique and universal people are. 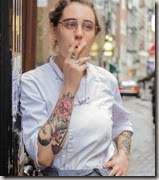 The similar ‘Street Art’ pages are creative and eclectic, but not quite as compelling.  ‘Unless they mash up with people, of course.