‘nice to be back in Maastricht.  Back along the river, back among my things, and back with friends.  The river is sparkling blue, cafe’s and parks comfortably filling with folks enjoying the sun, chatting over coffee, and watching the joggers and strollers roll past.

I plan to get a prime seat later on, order biertjes en bitterballen and settle in to soak it all up.

I landed in Amsterdam in late afternoon, dropping low over the harbour and the superyachts moored among the cargo ships.  The tulips have already fallen out of bloom, leaving the bold strokes of coloured fields dusty and brown.  Competently clearing the border (in Dutch), I catch the Sprinter into town.

The law offices in WTC East are fashionable; the team formidable.  We spend a couple of hours reviewing the week’s strategy and documentation, and I’m hopeful that Friday’s hearing goes as smoothly as the preliminaries.

By evening, I’m on the train south through the groene hart: rivers, cows, fields, windmills of Dutch tradition.

Twilight falls as familiar scenery scrolls past the windows.

By 9 pm, I’m opening the apartment and finally settling back in along the Maas.

‘Herb rub and mustard glaze the tenderloin, pasta is on the boil.  I open a local South African red wine.  It’s half the price and twice the quality of Tesco: I suspect that it enters the country under pricing agreements negotiated by the Dutch East India Company in the 17th century.

The sales are only seasonal, but 3 euros is irresistible. 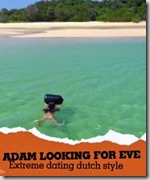 Adam zoekt Eva plays on the TV.  It’s a combination dating show – game show -  travel challenge where everyone is naked.  ‘Only in the Netherlands: it’s a nice counterpoint to the Extreme Blind Date scenario playing out on this season’s Amazing Race.  The women smile, tug their hair, and allow that the men seem nice; the men grin and talk abut how lucky that are to compete for the women.

I,  of course, use the opportunity to fine- tune my ear back into parsing spoken Dutch…

Night is too short, then warm morning sun streams through the widows at 5 am.  I’m up and out for a walk and a coffee along the river, scratching notes to remind myself of key points for meetings at 10.  Barges steam past towards Liege, miles to the south.  The bridges fill with bicycles, commuters and students as Zamboni-style street sweepers whirr past.

An expat is often someone who knows little about his own people he spent a long time with, but thinks he knows everything about the foreigners he has spent a short time with.     Tony Crossley, Living the Thai Life.

You’re an expatriate. You’ve lost touch with the soil. You get precious. Fake European standards have ruined you. You drink yourself to death. You become obsessed by sex. You spend all your time talking, not working. You are an expatriate, see? You hang around cafés.