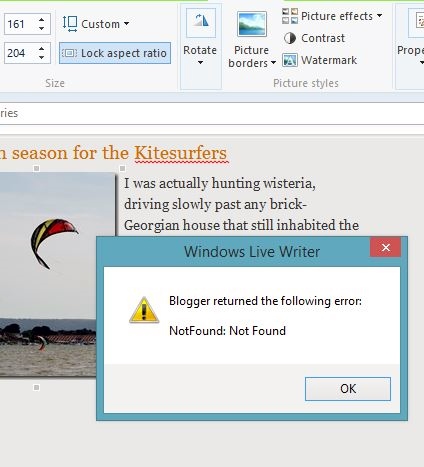 The problems first appeared last night, Windows Live Writer (WLW)  returning an error when I tried to push a new essay up onto Blogger. It looked like an authentication issue: I checked passwords, then had a beer and waited for Google to sort itself out.  An hour went by with no change.

A quick search turned up a number of frustrated WLW users

complaining in Blogger’s Help Forum.  Unhelpfully, we were informed that Google had changed it’s user validation process and that Microsoft had chosen not to update it’s software.  Microsoft, in turn, saw no reason to update a legacy product that had not been updated in years.

As the evening wore on, it became apparent that none of the Windows blogging clients had updated when told to, from BlogJet to BlogDesk, so nobody was able to post to Blogger.  Microsoft’s Word and Outlook interfaces were also broken.

Suggested work-arounds included migrating the blog to WordPress, but the importer likewise had not been updated, so all formatting was lost if I migrated using the Export Content To File / Import Content From File suggested by other users. 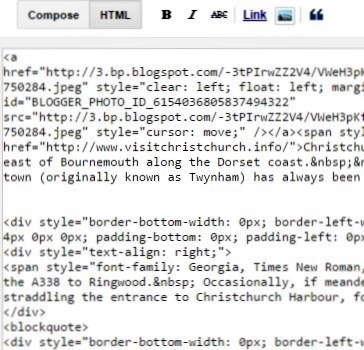 I took up the challenge and found that if I mailed a copy of the WLW post to Blogger, then copied Google’s HTML back to WLW, tweaked the format, and pasted the HTML back into Blogger, I could get a post published with pictures and formats.  It takes a bit of hacking at the code to smooth it out – if you are noticing small formatting glitches, that is why.

Google is now promising to work with Microsoft on a fix, we apologize for any inconvenience caused.
Some days the Internet is sooo brittle…
SHARE THIS POST

email
« Up the River Stour, Christchurch
Along the coast, across the moors »
Radar Weather