Rounding the crumbled cottages of Tyneham Gwyle, I found several families stopped along the trail, taking pictures.  I expected it was either framed by the ruins or the rhododendrons, but the star was Flower’s Barrow ridge, a spectacular chalk cliff luminous against the blue waters of Worbarrow Bay.

Lining up to take my turn at capturing the scene, I found that it became even better as I descended toward the crescent stone beaches below.

The path down to the water leads from the corner of the carpark opposite Tyneham’s entrance: I found it by walking the barb-wire perimeter that keeps visitors off of the tank artillery range.  From there, the path winds down a deep gulley among ruined cottages until the Bay comes into view.

The Bay itself is an enormous crescent bordered by the sheer white cliffs of Flower’s Barrow, collapsing into the sea above Cow Corner.  The colors range from dark greensward on the headlands over red mineral and earthen strata towards the eastern end, white chalk filling the western arc.  Dr, Ian West has a well illustrated and very detailed web page describing the geology of the Bay which makes absorbing sense of it all.

The path splits approaching the Bay, one part leading up to a promontory, Worbarrow Tout (=lookout), while the other forks down to the water’s edge.  The beach is large-scale gravel, warm and crunchy, with absolutely transparent glass-like water.  Various shells dot the shore: I started collecting up the unfamiliar cuttlefish blades. 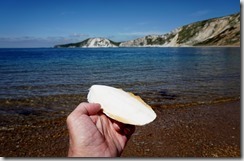 Finally, though, I just sat along the rocks and took it all in: there were only a few people about and no sound at all.

The South West Coast Path grazes the beach, rising steeply in both directions east and west.  I would love to spend a week doing the full ramble one day, but contented myself with a brief exploration to establish the general direction and to see how equipped people were.